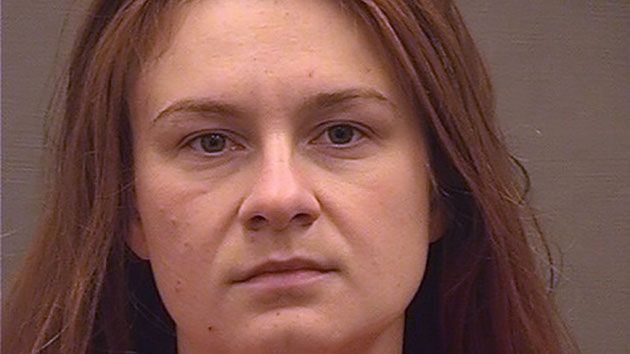 Alexandria Sheriff's Office/Getty Images(WASHINGTON) — Federal prosecutors have backed away from a salacious claim that Maria Butina, a Washington woman arrested for allegedly acting as a covert agent of the Russian government, had used sex to gain access to politically connected Americans.
That explosive allegation, prosecutors now say, was based on a misreading of a series of text messages between Butina and an unnamed man. Prosecutors accept that “the government’s understanding of this particular text conversation was mistaken,” according to a court filing prosecutors submitted late Friday night in Butina’s case.
The unusual concession came in a request prosecutors submitted to the U.S. District Court that otherwise maintained the position that Butina’s conduct was unlawful and that she should continue to be held behind bars without bail because of the government’s belief she remains a flight risk.
The filing came as Butina is scheduled to return to court for a status hearing on Monday.
The government’s allegation that she used sex as part of an alleged effort to infiltrate powerful conservative groups and build relationships with prominent Americans attracted headlines and drew comparisons to the recent Hollywood film, Red Sparrow, which focused on the seductive aspects of spycraft.
The allegation drew a sustained and vocal response from Butina’s lawyer, Robert Driscoll.
“I’m glad the government walked back its false allegation that Maria traded sex for a job, but it's hard to overcome the avalanche of stories that repeated a lie. More importantly, the government's case to detain her is weak, and I'm grateful the court will have a hearing on releasing her tomorrow," he said.
Prosecutors have not backed off efforts, however, to question the nature of the relationship between Butina and veteran conservative operative Paul Erickson, who is identified in court filings as U.S. Person 1.
They say Butina, 29, ensnared Erickson, 56, in a “duplicitous relationship,” using him for cover and connections as she developed an influence operation designed to “advance the agenda of the Russian Federation.”
Driscoll has argued the relationship was a genuine romance, and pointed to a homemade video obtained by ABC News of the two in a Moscow music studio gazing adoringly into each other’s eyes as they sang the title track from Beauty and the Beast.
“I think in some ways it’s a classic love story,” Driscoll said, adding that he thinks reporters are "filling in a lot of the gaps with a lot of spy novels.”
Erickson did not respond to repeated messages seeking comment. He has not been accused of any wrongdoing, and it remains unclear if he could face any charges in connection to Butina’s alleged conspiracy.
Several messages left at the office of the attorney said to be representing Erickson were not returned.
In Friday’s court filing, prosecutors continued to try and cast doubt on the relationship. While Driscoll has said Erickson has been visiting Butina in jail, prosecutors suggested she may have turned on him.
“Although the defense contends that the defendant is in a committed relationship with U.S. Person 1,” the government attorneys wrote, “she recently offered to provide information to the government about his illegal activities.”
Prosecutors continue to argue Butina is a flight risk and should be held in jail before her trial. They argue that the Russian response to her arrest is itself an indication of her importance to their government.
The Russian government has conducted six consular visits with Butina and passed four diplomatic notes to the U.S. Department of State. Russian Foreign Minister Sergey Lavrov has spoken to the U.S. secretary of state twice to complain about her prosecution, the court filing notes.
“Put simply, the Russian government has given this case much more attention than other cases,” it says. “If the defendant is released, and she goes to the Russian embassy or consulate, she will be beyond the reach of this court, and it will have no redress.”
Driscoll, by contrast, has maintained that Butina wishes to clear her name and that Butina and Erickson, despite the government’s claims to the contrary, are engaged in a mutual and genuine romance.
And she is not, he said, someone using sex as a tool.
“I think she was very upset,” Driscoll told ABC News recently. “Because it really was a shot — I considered it a smear against her reputation — that they really did imply that she was sleeping with people in the U.S. for access to these organizations. And that's simply not true.”
Copyright © 2018, ABC Radio. All rights reserved.