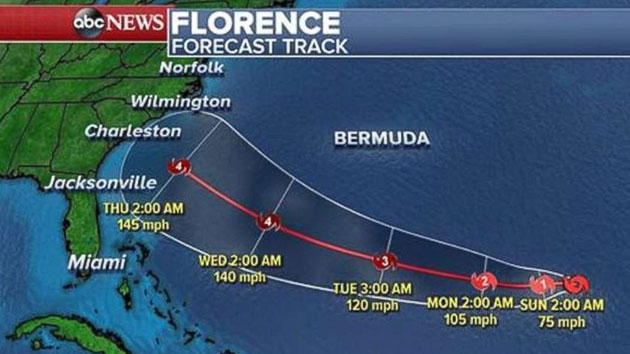 ABC News(NEW YORK) — The peak of hurricane season in the Atlantic Ocean is Sept. 10, and right on schedule, the Atlantic Basin has come to life with numerous areas of concern. Foremost among those is Tropical Storm Florence, which is expected to re-strengthen into a hurricane Sunday and looks increasingly likely to hit the East Coast.

Tropical Storm Florence has sustained winds of 70 mph Saturday evening as it is located 810 miles southeast of Bermuda. The storm is moving west at 5 mph.

Florence is still a tropical storm, but is expected to become a hurricane by Sunday, and a major hurricane again on Monday.

The storm is forecast to move generally in a westward direction over the coming days, with an increase in forward speed during the early part of the week. On this path, Florence will track over the warm waters off the southeast U.S. coastline.

As Florence moves west, the wind shear will decrease, allowing Florence to become more organized and intensify. There is a possibility of significant intensification in the early part of next week.

The immediate threat this weekend will be large swells and dangerous rip currents along the East Coast due to the storm.

Tropical Storm Helene formed just west of Africa in the early morning hours of Saturday. Helene has winds of 45 mph, and is 330 miles from the Cabo Verde Islands. The storm is moving west at 13 mph.

Helene will likely become a hurricane next week.

Moving closer to the Caribbean, Tropical Depression Nine has maximum sustained winds of 35 mph Saturday morning, and is currently 172 miles east of the Windward Islands. The system is moving west-northwest at 5 mph.

The system is expected to move westward over the coming days, and will likely become a tropical storm later Saturday. The forecast track has the storm strengthening to a hurricane next week as is tracks west.

It is too early to determine what, if any, impacts this system will have on the Caribbean. However, the system is worth watching as we get into next week as it nears the Lesser Antilles.

The Pacific Ocean is also lively this weekend.

Hurricane Olivia had maximum sustained winds of 90 mph, and was approximately 1,370 miles east of Honolulu as of 11 p.m. local time.

Olivia is expected to move west-northwest through Saturday, before turning more westward on Sunday. The storm will slowly weaken over the next few days.

Olivia is expected to approach the main Hawaiian Islands early next week, but it is too early to determine the magnitude of the potential impacts.

It is important to note that significant impacts are possible well away from the center of the storm, and that the track error can be quite large at day 5 and beyond.