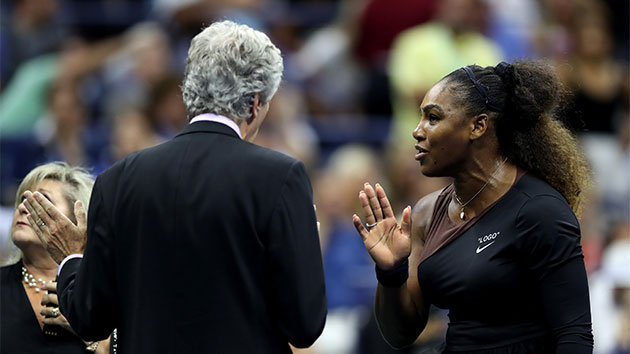 Elsa/Getty Images(NEW YORK) — Serena Williams lost a chance to make history at the U.S. Open Saturday — but the tennis great also lost her temper in spectacular fashion on her way to losing the final in straight sets.

But the match was overshadowed by Williams' eruption — which was sparked when the chair umpire called a coaching violation against her and reached its peak when she slammed her racket on the court.

"I don't cheat to win," she screamed at the umpire. "I would rather lose."

Williams' meltdown continued when the umpire gave her another warning.

"I have a daughter and I stand for what is right," she said. "I have never cheated.”

As the crowd at the Arthur Ashe Stadium, the umpire issued a game penalty in the second set, making the score 3-5, putting Osaka that much closer to winning the tournament.

Williams appealed to U.S. Open referee, who sided with the umpire. She returned to serve and won the next game, making the match 4-5.

But Osaka closed out the tennis legend and new mom in the next game.

Osaka made history by becoming the first Japanese player to ever win a Grand Slam title.

But the victory was marred by controversy.

After the match, Williams hugged Osaka, but the newly crowned U.S. Open champion sat down and cried quietly.

During the trophy presentation, the crowd continued to boo, causing Osaka to cry again on the stage.

Williams didn't address the controversy, but defended her opponent.

"Well I don’t want to be rude but I don’t want to do questions. She played well," Williams said, referring to Osaka. "This is her first grand slam. I know you guys were rooting … let’s not boo anymore … congratulations Naomi … I hope to play here again.”

Osaka acknowledged that she was not the fan favorite and that "everyone was cheering for" Williams.

"I'm sorry it had to end like this," she said. "I just want to say thank you for watching the match … it was always my dream to play Serena at the US Open finals … I am grateful. Thank you."

Williams got emotional during the press conference afterward and comforted Osaka because "she's crying and she just won."

"I felt like, 'Wow, this isn't how I felt when I won my first Grand Slam, so I was like, I definitely don't want her to feel like that," Williams said. "Yeah, maybe it was the mom in me that was like, 'We've to pull ourselves together here."