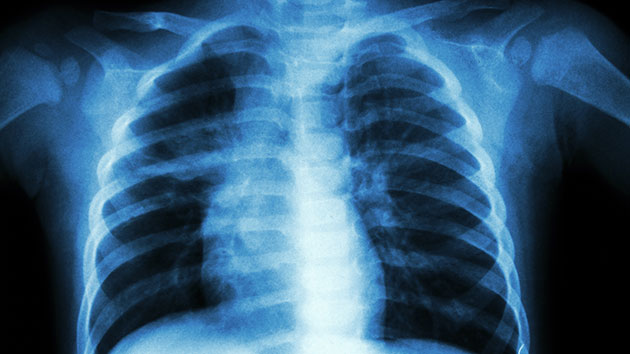 iStock/ThinkstockBy DR. JONATHAN STEINMAN
(NEW YORK) — Tuberculosis (TB), a lung disease most often transmitted by breathing infected particles in the air, is the ninth leading cause of death worldwide. An estimated 10.4 million people fell ill with TB in 2016, and about 1.7 million died. The most dangerous type — multidrug-resistant tuberculosis, or MDR-TB — can't be cured by the usual rounds of antibiotics. But a new study finds significant success in new treatment options. Here’s what you need to know:
What is TB?
TB is caused by bacteria that usually attack the lungs but can also infect other parts of the body, such as the kidney, spine or brain. TB bacteria are spread through the air, most commonly when a person with TB of the lungs or throat coughs, speaks or sings.
What are the symptoms and treatment for TB disease?
Not everyone infected with TB becomes sick. Although symptoms can resolve on their own, the infection usually remains in the body. Symptoms can recur at any point, sometimes more severe than initially. When TB bacteria start growing and the immune system can't stop their growth, TB infection becomes TB disease and must be treated with a drug treatment that can last months. Symptoms for people with TB of the lungs can include fevers, coughs that bring up blood and weight loss.
Who is at risk?
All age groups are at risk of acquiring any form of TB. Patients with HIV or whose immune systems are otherwise impaired — including people with diabetes or who are on chemotherapy or certain other medications — are at highest risk of developing an active TB infection. While the prevalence of TB is low in the United States, it is much more common in other parts of the world, with India, Indonesia and China having the highest number of cases.
What is multidrug-resistant TB?
MDR-TB, which is deemed a public health crisis by the World Health Organization (WHO), is caused by strains of TB bacteria that do not respond to standard antibiotics, which can lead to treatment failures or death. There were an estimated 490,000 new cases of multidrug-resistant TB in 2016, and 240,000 people died of this strain of the disease. A rarer but particularly dangerous strain that is resistant to more types of antibiotics than typical MDR-TB is called extensively drug-resistant TB or XDR-TB. Approximately 490,000 people developed MDR-TB in 2016 alone. Resistance can also develop among people who fail to take their full course of antibiotics.
Can MDR-TB be cured?
Not consistently, which is why doctors are so concerned. The cure rate for MDR-TB is just over 50 percent. Treatment options are costly and can result in severe side effects, including psychiatric abnormalities, liver damage and hearing problems. But new research on treatments for multidrug-resistant TB shows progress in improving outcomes.
What does the new study on treatments for multidrug-resistant TB show?
As the usual TB drugs don't work on multidrug-resistant strains, doctors have been testing other antibiotics that show better cure rates and survival. An international team of researchers in a study published Sept. 8 in Lancet reviewed 50 studies covering treatment of more than 12,000 patients in 25 countries, and compiled a database tracking outcomes of each case. They found that promising antibiotics include fluoroquinolones (ciprofloxacin, levofloxacin), a class of drugs commonly used for urinary tract infections, ear infections and pneumonia. Newer drugs such as carbapenems, often reserved for severe infections, have demonstrated effectiveness as well. These antibiotics have actually helped increase the cure rate for MDR-TB to just about 65 percent.
Physicians are hopeful they can get even more people cured. With better lab technology around the globe, clinicians will have an easier time testing the effectiveness of drugs against this dangerous disease.
If you or anyone you know is exhibiting symptoms of active tuberculosis infection, act fast and go to the nearest emergency room for evaluation. Rapid treatment is key in the fight against TB.
Dr. Jonathan Steinman is a radiology physician and writer with the ABC News Medical Unit.
Copyright © 2018, ABC Radio. All rights reserved.