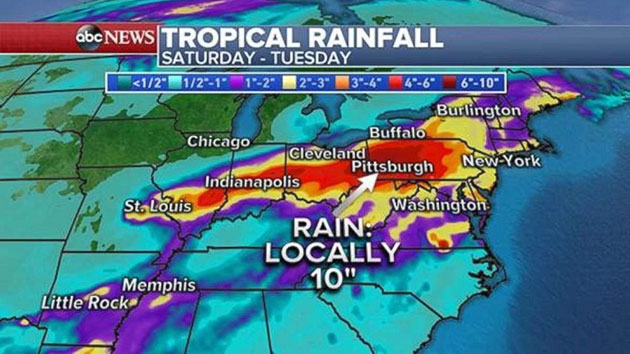 ABC News(NEW YORK) — There are three major fires burning in Northern California on Saturday — part of 34 uncontained wildfires currently burning in 13 states.
The Delta, Kerlin and Hirz fires are currently scorching Northern California.
The Delta Fire is at zero percent containment and has scorched 31,325 acres of land. The Kerlin Fire is also at zero percent containment and has burned 1,228 acres. The Hirz Fire is the largest of the three, with 46,150 acres burned, but is 89 percent contained.
The smoke from these fires was so thick in Redding, California, on Friday that schools dismissed their students early and outside events were canceled. Longtime residents of Redding commented that these were the worst wildfire smoke conditions they’ve seen.
In Shasta County, where the Delta Fire is burning uncontained, a 50-mile stretch of Interstate 5 is shut down, and won't open until Sunday at the earliest.
Weather conditions in Northern California will continue to support the fires on Saturday. It’ll be breezy in the Sierra Nevada Mountains with temperatures in the valley in the low to mid 90s.
There are red-flag warnings in effect further east, near Pocatello, Idaho, where gusty winds could quickly spread any fires that ignite on Saturday.
Gordon's remains drench Midwest
The remnants of Gordon are steering moisture from the Gulf into a stalled storm system in the Midwest and bringing heavy rainfall to the region.
Three to six inches of rain fell on Friday from Kansas to Illinois, causing roadways to flood and waterways to swell. Greeley, Kansas, received 5.45 inches of rain over the span of about 10 hours on Friday. Hundreds of miles away, Springfield, Illinois, reported 6.5 inches of rain on Friday.
Precipitation will continue to inundate the region Saturday, with the greatest rainfall amounts expected over Illinois, Indiana, Ohio and Pennsylvania. In these areas, rainfall rates will likely reach 2 inches per hour.
Philadelphia had already received 2.66 inches of rain in just 38 minutes overnight as the leading edge of the front nudged through the area.
As the weekend progresses, the system will move into the Northeast and bring heavy, prolonged downpours through Monday.
There is a possibility for major flash flooding, especially in eastern Ohio and western Pennsylvania, where 10 or more inches of rain is expected to fall locally Saturday through Monday.
Flood alerts have been issued from Texas to New Jersey.
Copyright © 2018, ABC Radio. All rights reserved.