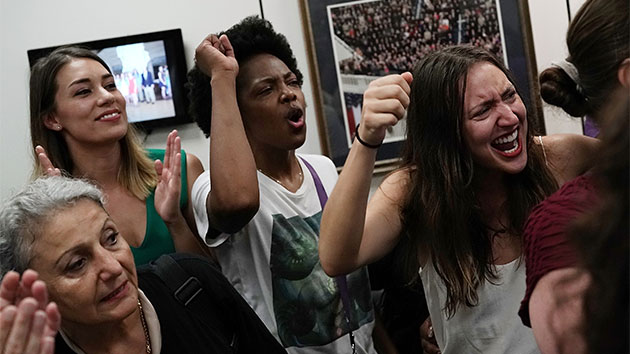 Alex Wong/Getty Images(WASHINGTON) — Every day this week, dozens of protesters on Capitol Hill were arrested, as hundreds more flooded the halls of the U.S. Senate and nearby grounds around congressional buildings.

Their objective was clear: To express deep opposition to and concern about President Trump’s Supreme Court nominee Brett Kavanaugh.

ABC News spoke to several of the protesters including many who flew across the country for the demonstrations in the nation’s capital.

The activists ranged in age and ethnicity. Many were women and connected to health, reproductive rights or environmental groups.

Some were brought by groups like Planned Parenthood and NARAL Pro-Choice America to tell their personal stories.

These organizations say Kavanaugh’s prior, socially conservative decisions -– as well as the blessing he has received from staunchly anti-abortion organizations — show that if confirmed to the highest court, he would likely use that post to restrict women’s access to abortions or overturn landmark cases that make abortion legal in the U.S.

'I'm the voice of thousands of women who died'

The 73-year-old Johnston recounted her personal experience with an unexpected pregnancy 56 years ago, before abortions were legal.

“It was also before the pill was invented. It was before birth control was legal and women had not much to say about anything,” Johnston, a Maine resident, told ABC News in a telephone interview while she was in Washington, D.C., this week.

She said she and her long-term boyfriend were 18 years old and just starting college. They used a condom, but it failed.

“My mother threw me out. She was so ashamed," Johnston said. "I thought I ruined everyone's lives. I thought, 'I'm just going to kill myself.'”

She said she eventually decided with her parents that she did not want to have the baby. She wanted to continue her education.

They found through friends of friends a doctor in Pennsylvania who would perform an abortion. “In the old days, it was like a network of women who knew where to go,” she said, adding that her father drove her there and back, but never talked about it again.

“I tell this story and especially younger women realize, like, this could be them,” said Johnston, who went on to earn multiple advanced degrees.

“I'm the voice of thousands of women who died. I'm standing on their shoulders and I have to speak out because it can’t happen again,” Johnston said.

One of Johnston’s senators, Republican Susan Collins, is a potential swing vote in Kavanaugh’s confirmation. Collins has in the past crossed party lines to defend women’s reproductive rights.

If I can decide to join the Marines, I can choose to end a pregnancy

Alex Ferencz, who came to the nation’s capital this week from Denver, signed up for the Marines when she was 19 and became pregnant 11 months before the end of her commission.

She had been working on planes and deployed to Kandar, Afghanistan, and she worried that she would not be able to provide for a newborn at a time she would be transitioning to civilian life.

“I can't help but love and serve this country,” Ferencz said. “I just want to be able to help people.”

Ferencz said she had to travel a distance off base to a Planned Parenthood to have her abortion. She had to wait several days after making the appointment because of a legally mandated waiting period in the state. In the end, she was able to take a pill and terminate the pregnancy in her own home.

The military, she said, told her it would not help cover abortion costs nor medical costs from any complications.

“I just think it’s so ridiculous," Ferencz said. "I am willing to sacrifice my life and work very hard to protect the freedoms that we love. And for somebody I have never known to say that I need to leave and wait to figure this out, because I didn’t know any better …” she trailed off. “If I can make the decision to join the Marine Corps, during a time of war, I can make the decision to terminate a pregnancy.”

Each of the women interviewed expressed a deep desire to protect women’s access to birth control and abortions and also to destigmatize both. They talked of feeling isolated and alone during painful times in their lives and not wanting other women to experience that. Asked about how they would feel should Kavanaugh still get confirmed, all of the women talked about finding power in working together and building communities.

Ebony Wiggins, 26, came to Washington, D.C., this week from Nashville, Tennessee. She said her abortion was incredibly hard, and she had to do it all alone.

She was 22 and not with either her family or partner, but she said she did not hesitate. She knew it was what she wanted and she felt stronger afterwards. She said no one abortion or woman is the same. Every circumstance is different.

Wiggins said she is concerned that this appointment to the Supreme Court would be long-term. Kavanaugh is 53 years old, and justices are appointed for life.

“This isn’t like a senator or a governor who we can vote out," Johnston said. "I mean, this is somebody who can literally serve in this position, in that seat, for as long that he is around. And so, just the idea that he is not that progressive or that he may be not that open-minded, that’s very, very worrisome. Even if he gets voted in and in a year or two no big abortion laws, Roe vs. Wade, have been brought up … but what about in 10 years? What happens in 20 years?"