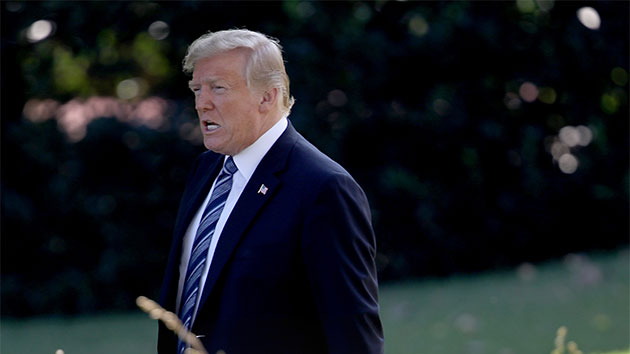 Win McNamee/Getty Images(WASHINGTON) — President Donald Trump called for the Justice Department to investigate the author of an anonymous op-ed in the New York Times that suggested that members of the administration were working against the president.

Speaking to reporters aboard Air Force One, Trump called on the DOJ to investigate the matter, citing national security concerns.

The president also told reporters he’s “looking at” whether there are any actions that can be taken against the Times, which said it was taking an extraordinary step in allowing the piece to be published anonymously.

“Well we’re going to see, I’m looking at that right now,” he said. “For the New York Times to allow that to happen is disgraceful.”

The Justice Department declined to confirm or deny an investigation.

“Eventually the name of this sick person will come out,” Trump added, although he also suggested the person, reportedly a senior administration official, may not exist.

“Hey maybe it’s nobody maybe the Times did it. The Times uses phony sources all the time,” Trump said.

In a statement, the Times said it was "confident that the Department of Justice understands that the First Amendment protects all American citizens and that it would not participate in such a blatant abuse of government power.

"The president’s threats both underscore why we must safeguard the identity of the writer of this Op-Ed and serve as a reminder of the importance of a free and independent press to American democracy," the statement continued.

The Times piece, published on Sept. 5, , has sparked the president's ire, leading him to tweet in all caps "TREASON?" and calling the author "GUTLESS."

In the piece, the author, whose identity the Times is withholding, wrote "I work for the president but like-minded colleagues and I have vowed to thwart parts of his agenda and his worst inclinations."

"To be clear, ours is not the popular “resistance” of the left. We want the administration to succeed and think that many of its policies have already made America safer and more prosperous," the op-ed says.

"But we believe our first duty is to this country, and the president continues to act in a manner that is detrimental to the health of our republic."

A number of Trump's cabinet members have denied writing the letter.