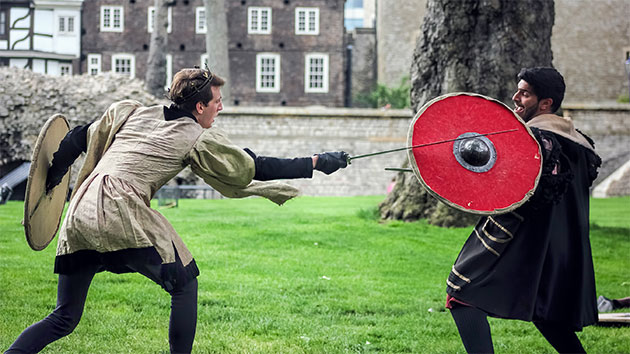 iStock/Thinkstock(NEW YORK) — A beginner swordsman called over by an instructor to participate in a demonstration for the class instead got an accidental blade through the eye that pierced his skull and left him blind, paralyzed and brain-damaged, according to a $9 million lawsuit filed against the teacher and his school in Oregon.

Instructor James Romandelle Brown was trying to demonstrate a move last year using new student Jeremiah DuPrau when his sword went through DuPrau's right eye socket and into his brain and damaged muscles, nerves and tendons, according to the lawsuit.

DuPrau contends in the lawsuit that Romandelle failed to warn the student to don his protective headgear.

“He’s unable to drive, unable to ride his bike, unable to hike,” DuPrau's attorney, John Coletti told The Oregonian newspaper. “He actually had to give his dog away because he was unable to take care of it.”

Coletti also said in that interview that his client was attending his third class, and had previously worked as an educational aide for Portland Public Schools.

Attorney Sia Rezvani, who represents Brown and the school, Swordguild Portland, declined to comment until the litigation was resolved.

In addition to his other injuries, DuPrau also has difficulty walking and speaking due to a stroke and suffers from weakness on his partially paralyzed left side, according to the lawsuit.

DuPrau is also suing the Elk Lodge where the class was held — the Milwaukie-Portland Lodge No. 142 — for helping Brown "to hold classes for novice students who were in turn exposed to unreasonable risks of harm," the lawsuit alleges.

Attempts to reach someone at the lodge were not immediately successful.

Swordguild Portland describes itself as a "school for the serious study of Historical European Martial Arts" on its Instagram page.

"Want to learn how to sword fight? Not like in the Olympics; you want to get Medieval with it? Then you have found the right place," its website says.