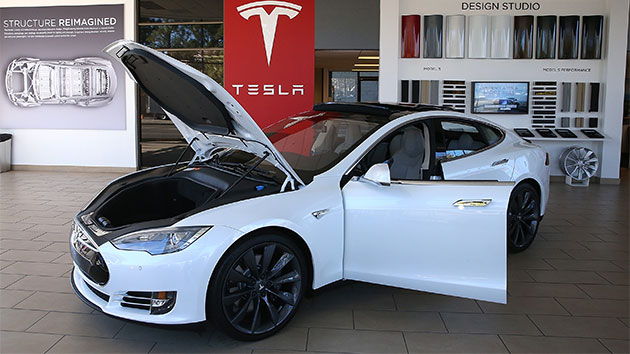 Justin Sullivan/Getty Images(NEW YORK) — Tesla shares were volatile Friday morning amid chaotic news for the embattled electric carmaker, leading one expert to say the company board needs to have a 'come to Jesus meeting' with Elon Musk.

Shares tumbled upon news of two senior executives leaving the company hours after founder and CEO Musk smoked marijuana and drank whiskey on a podcast interview. Midday, Tesla shares were trading 6.4 percent lower at $262.90, after having dropped 10 percent.

"It’s time for the board of directors to have a 'come to Jesus meeting' with Elon Musk," said William Klepper, a corporate governance expert who is a professor at Columbia Business School and author of "The CEO’s Boss: Tough Love in the Boardroom."

"The board can’t sit back and watch this destruction of value because of the uncertainty of behavior the CEO is presenting to the public. There’s not debate or question it’s Elon Musks’s company — he’s the genius behind it. That doesn’t mean, if you’re publicly traded, that the board of directors is the cheerleading squad for the founder. They have other people’s money and have a responsibility to them," Klepper said.

Tesla did not immediately respond to ABC News' request for comment.

On Tuesday, Tesla Chief Accounting Officer Dave Morton announced after a month in his position that he was resigning from the company, effective immediately.

"Since I joined Tesla on August 6th, the level of public attention placed on the company, as well as the pace within the company, have exceeded my expectations. As a result, this caused me to reconsider my future. I want to be clear that I believe strongly in Tesla, its mission, and its future prospects, and I have no disagreements with Tesla’s leadership or its financial reporting," Morton said, as detailed in a Securities and Exchange Commission filing.

The company has had a tumultuous year with executive turnover. In March, Morton's predecessor, Eric Branderiz, abruptly left. Less than a week later, Susan Repo, the company's treasurer and vice president of finance left for a different company. Chief Financial Officer Jason Wheeler quit in April after less than 17 months.

In addition, Musk faces an SEC probe regarding a possible violation of regulations after he mused in a tweet about taking the company private.

"Remember, particularly when you see this behavior — possibly violating SEC regulations, remember Elon Musk is playing with other people's money. It's not his money. One thing you don't do is tweet you're going private and you have funding," Klepper said.

Tesla's head of human resources, Gabrielle Toledano, who is currently on a leave of absence, told Bloomberg News Friday morning that she would not return to Tesla.

Late Thursday night, Musk smoked marijuana and drank whiskey on a live streamed podcast interview with comedian Joe Rogan in Los Angeles, where marijuana is legal. During the interview, which lasted over two and a half hours, Musk discussed artificial intelligence, Tesla, robots and aliens in a wide-ranging chat with the comedian.