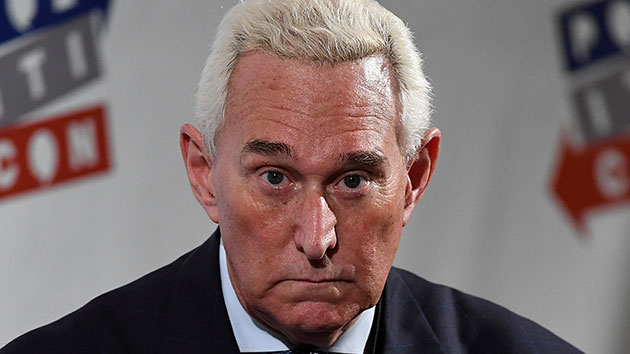 (WASHINGTON) — A past associate of Roger Stone, President Donald Trump’s longtime ally and a veteran political operative, appeared before a federal grand jury in Washington Friday after being subpoenaed by special counsel Robert Mueller.

Political humorist and radio show host Randy Credico is the latest Stone associate to be summoned to testify in Mueller's probe into Russian meddling in the 2016 presidential election.

Credico spent two hours and 15 minutes before the grand jury, bringing with him his therapy dog, Bianca. When he emerged from the courthouse, his lawyer Marty Stolar told ABC News the focus of Credico's testimony was his relationship with Stone. Credico told reporters outside the court that the last time he communicated with Stone was in May.

When asked if he thinks the special counsel will want to hear more from Credico, Stolar said, "We'll see if they want to talk to us again." Stolar said that Mueller's team might want to conduct subsequent interviews with Credico and ask him about his emails.

"But as far as we're concerned, today, they're finished with the testimony, and that should end it," Stolar added.

Jerome Corsi, who until recently served as Washington bureau chief for InfoWars — the program hosted by right-wing conspiracy theorist Alex Jones — was also scheduled to testify before Mueller’s grand jury Friday, but his appearance was canceled late Thursday night, his lawyer David Gray told ABC News. When asked for additional details on the matter, Gray declined to comment.

ABC News has reported that at least 10 individuals associated with Stone have been contacted by the special counsel.

Credico has surfaced as a possible link between Stone and Assange. Stone told Congress in September 2017 that he asked Credico to act as an intermediary between him and WikiLeaks publisher Julian Assange.

Stone, who has taken credit for persuading President Trump to get into politics, served as an adviser to Trump’s presidential campaign but left amid controversy in 2015. Stone continued to advise Trump informally after he left the campaign. He has been under scrutiny, in part, because of statements he made in August 2016 that hinted he may have known in advance about WikiLeaks' plan to release damaging information on Clinton. He says he didn’t.

In July, Stone told ABC News that he is the unnamed Trump campaign regular who corresponded with Russian hackers, as described in special counsel Mueller’s July 13 indictment against a dozen Russians intelligence officers, posing under the name Guccifer 2.0, who allegedly engaged in a sustained effort to hack Democrats and Clinton aides during the 2016 presidential campaign. Stone said the exchanges were brief and innocuous and he denies knowing Russian operatives were behind Guccifer 2.0.