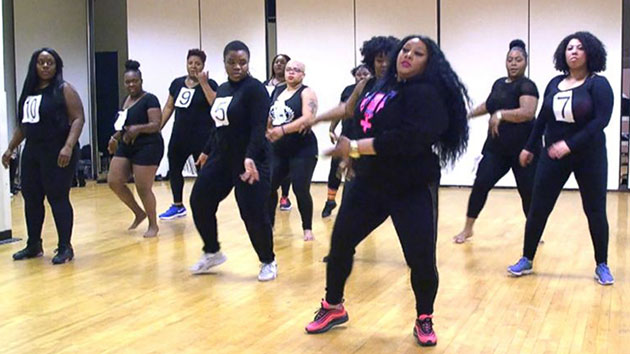 Briana Stewart/ABC(NEW YORK) — In the world of dance, the bodies that usually take center stage are often the slimmer, long-limbed, hourglass figures. However, Pretty Big Movement, a full-figured dance company based in New York City, is here to prove you don’t need to be a size 2 to be a mesmerizing performer.
The international dance company has already shaken the industry by smashing body image standards with its viral dance videos, and challenged the physical definition of what it means to be a dancer. They’ve been featured in hit shows such as America’s Got Talent and Dance Moms, and were most recently featured in Janet Jackson’s Made for Now music video.
Now, the company is giving back to the community with an apprenticeship program that teaches aspiring plus-size dancers how to slay the dance floor.
Founder Akira Armstrong developed the idea after an unsuccessful casting call.
"The main reason why I started the Pretty Big Movement apprenticeship program was because when I held auditions, there were women who weren’t quite ready to be a part of the core company, but I felt like their journeys shouldn’t stop there. So they inspired me to create a program where we can train them and give them a foundation," Armstrong said.
What started off as a dance program turned into a sisterhood of healing and support. Several women in the program recounted stories of having to fight fat-shaming stereotypes while trying to pursue their dreams.
"People were constantly doubting that I would be able to dance. Just because I’m big, I’m automatically thought to be not capable," said Paola Garcia, an apprentice dancer who vividly recalled being discouraged in the dance studio from an early age due to her size.

Kristen Martin, a dancer who also participated in the program, shared a similar experience of having to deal with people’s perceptions of her body throughout her life.
"My body type has always been someone else's problem. Anything that was said about my body was external. It’s never been internal. But when people constantly prejudge you, you start to second-guess whether you can fit in," Martin said.
So, in addition to training, the program teaches full-figured dancers how to cultivate the unabashed self-confidence needed to ace an audition — something Armstrong had to master herself when she performed as Beyoncé’s back-up dancer in the music videos Green Light and Get Me Bodied.
"Many of the women come to us broken in spirit, but part of the apprenticeship program is breaking the negative mold that these women have been told their whole lives. So not only are we talking about training, but we are talking about uplifting and helping them to understand the bodies that they wear," Armstrong said.
During the night of the first apprenticeship showcase, Martin, Garcia and many of their fellow dancers expressed the joy of being seen for their talent rather than their body size.
"This is a space that has never been created before," Martin said. "Coming here and being able to be myself is incredibly freeing."
Copyright © 2018, ABC Radio. All rights reserved.

Kristen Bell shows off her dance moves to celebrate returning to work
No big gatherings for Saint Patrick’s Day in Boston: ‘We are so close to a finish line’
Shaq names his ideal ‘Big 3,’ talks new ad, NBA predictions
Funding behind ‘Stop the Steal’ movement shrouded in mystery
And Just Like That… Chris Noth hints Mr. Big could be heading to the ‘Sex and the City’ reboot
THON 2021 raises over $10.6 million for fight against childhood cancer