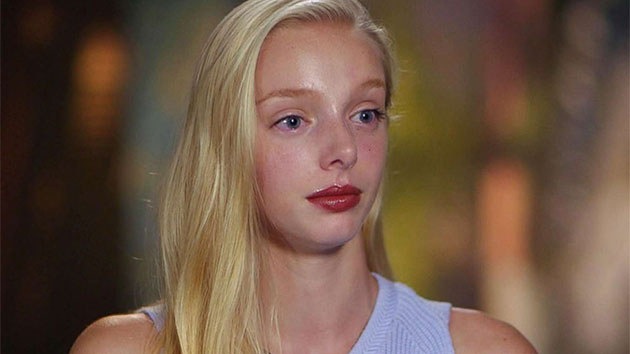 ABC News(NEW YORK) — A 19-year-old ballerina who's suing New York City Ballet said it's "kind of disappointing to think back to when I was younger and how I idolized the place and the people in it."

"And now," Alexandra Waterbury, a former student at the company, told "Good Morning America" in an interview, "it's just a shame."

Waterbury filed a lawsuit filed Tuesday in New York State Supreme Court that lists as defendants City Ballet and former principal dancer Chase Finlay, whom she dated and who allegedly shared naked photos of her with other male performers.

The suit alleges that a group of male dancers regularly shared with each other nude photos of female dancers and that a “fraternity-like atmosphere permeates the Ballet and its dancers and emboldens them to disregard the law and violate the basic rights of women.”

Finlay's attorney said in a statement the lawsuit is "nothing more than allegations that should not be taken as fact. Matters such as these should and will be litigated in courtrooms where the truth can emerge rather than in the media."

City Ballet Chairman Charles Scharf said in a statement that the company "vehemently denies" the allegations.

Scharf said the company had not condoned any of the alleged behavior and that it “has no liability for the actions specified in the complaint and has taken the appropriate disciplinary actions for the dancers involved.”

“New York City Ballet is confident that there is no basis for this lawsuit, and vehemently denies the allegations that the company has condoned, encouraged, or fostered the kind of activity that Mr. Finlay and the others named have participated in, which were off-hours activities that were not known, approved, or facilitated by NYCB,” according to the statement.

He added of the allegations: “We investigated them and found that the actions had violated the Company’s norms of conduct, and immediate and appropriate action was taken.”

Waterbury grew up "idolizing" Finlay, who's about seven years older than her, but it wasn't long after they started dating that he was "abusive in every way — physically, emotionally, mentally. He was really manipulative,” she told “GMA.”

"He was leaving for the airport for a job at 4 in the morning, so he let me stay at his apartment," she recalled. "And I woke up in the morning to check my email, and he had given me the password to his laptop, so I logged on. And the first thing that popped up was an unsaved number with some pretty descriptive language. That just wasn't OK. I was just like, 'What is this?' and it just got worse and worse."

Waterbury said she saw on the computer conversations with women but also with men, "all of whom I would've considered friends … that were just really misogynistic and vulgar and just cruel. It was a lot to take in."

When she confronted Finlay about the alleged conversations and photos, Waterbury said, "he just had nothing to say."

She'd been disappointed it took so long for the ballet company to address the situation, Waterbury added.

"They could've apologized," she told "GMA." "They could apologize publicly. They could address the situation at least. I'm disappointed in the fact that it took four months for any action to be taken, especially since I'm a former student of theirs, especially since there are board members with daughters in my class. Just kind of weak to not say or do anything for such a long period of time."

Her lawsuit seeks, among other things, an "order permanently restraining defendants from engaging in such unlawful conduct" and unspecified monetary damages.