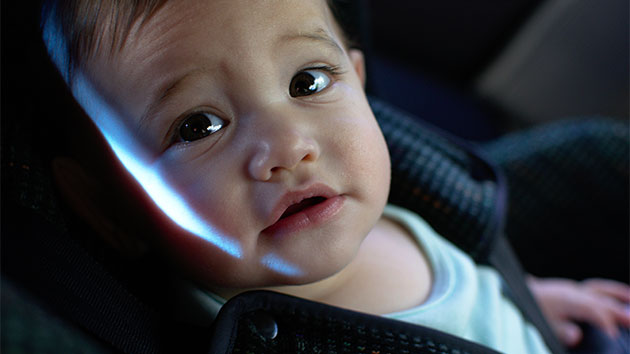 iStock/Thinkstock(NEW YORK) — A still-rattled mother recounted the terrifying moments when her new car unexpectedly locked her out, leaving her baby trapped inside on a scorching-hot day.

The incident unfolded Tuesday afternoon when Katie Corbin and her 1-year-old son, Joey, pulled into a gas station in Northville, Michigan, she told ABC News Friday.

Corbin parked in the shade, got out of her 2018 Chevy Malibu and closed the driver's side door when all of the doors lock with both key fobs inside, she said.

The temperature reached 91 degrees that day with a heat index — or what it feels like — of 101 degrees.

The Northville Police Department dispatcher told her someone was en route but could not provide an estimated time or say whether police were coming with lights and sirens, she said.

As she panicked, Corbin said, Joey started to sweat and cry, which made her panic more.

"I'm a first-time mom … and I'm a stay-at-home mom so we're always together; it put me over the edge" and she cried herself, Corbin recalled.

Bystanders, including an off-duty firefighter, came over to help but to no avail, she said.

"It felt like an eternity," Corbin, who has had the car for about a month, said of the roughly 15-minute ordeal.

When police arrived after a few minutes, they accessed the front doors, Corbin said, but the antitheft alarm went off so it took extra several minutes to unlock the back door.

Joey was safe, healthy and immediately stopped crying after they entered the vehicle, his mother said.

In the aftermath of the ordeal, Corbin said she called the dealership for an explanation.

"The factory settings were set so there's this passive lock that automatically locks your door when you walk away from it,” Corbin said. “[The dealership employee] explained to me how to change that passive lock setting.”

"A driver should never leave a key fob in the vehicle with an unattended child, even for a brief time. With the fob in the car, the child may be able to lock and unlock the doors and operate the power windows, both of which can dangerous," Wilkinson said.

"Also, as the dealer indicated, if a vehicle has been programmed to auto lock, it can lock if something interrupts the signal between the vehicle and the fob, even if the fob is in the vehicle."

Wilkinson added that drivers should know "if they are in a situation where they wouldn’t leave the key in the ignition of a conventional vehicle, they should not leave the fob in a newer vehicle. … If the fob is in the vehicle, someone can hop in, push start, and drive away."

Corbin said she also voiced her concerns that the response from authorities wasn't quick enough.

Ten to 15 minutes is the standard response time, Corbin said a police sergeant told her, adding that he was impressed by the officers’ 10-minute response considering how busy they were at that time.

He added that lights and sirens are not used in situations police don't consider life-threatening, she said.

"I really wish that the police would come up with an appropriate protocol for when an infant is left in a car," she said.

"My response to her was thanking her for registering her concerns. We have a very comprehensive process for citizen complains so we are following our policy," Mutchler said. "As we always do any time there are concerns with our service, we use that as an opportunity to review our process and procedures, and that is ongoing right now.

"Our response time was right around 9 minutes," he said, explaining that "the officer responded from virtually the other end of the" 16.8-square-mile community.

"A child locked in a car certainly could be life-threatening," Mutchler said, though adding that in this case the child was known to be conscious.

Children's bodies heat up much faster than adults and children's internal organs begin to shut down after their core body temperature reaches 104 degrees, according to a report from the National Safety Council.

On an 86-degree day, for example, it would take only about 10 minutes for the inside of a car to reach a dangerous 105 degrees, the report added.

At least 44 children have died from being inside hot cars this year in the United States, according to the organization KidsandCars.org.

Corbin said her advice to other parents is, "Think of worst case scenario, always. And don't keep your key fobs in your purse; keep it out."

"I've had a keyless car for years and did not think something like this could happen. And because of it my child was put in harm's way," she added.

"The feeling of seeing my baby crying and reaching for me and me bring inches away not being able to get to him, it was the worst feeling I have ever felt."