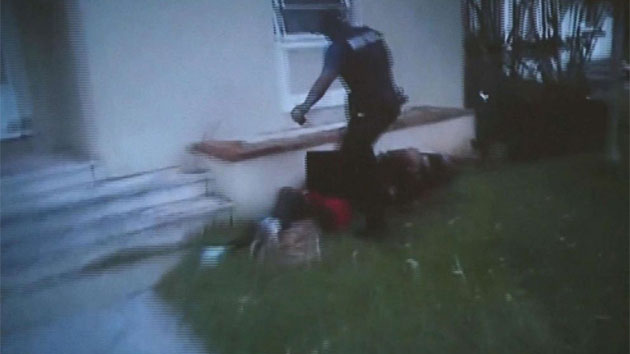 Miami Police Department(MIAMI) — For the second time in five months, a Miami police officer has made the news for allegedly kicking a suspect in the head.

Officer John Askew of the Miami Police Department appears to stomp on a teenage girl's head twice during an arrest, in footage recorded by a body camera in February this year, ABC affiliate WPLG-TV in Miami reported. A city panel investigating the incident this week allowed media in to see and record the footage.

The video's emergence comes just months after another Miami police officer was charged with assault and relieved from duty after cellphone footage showing him apparently kicking the head of a handcuffed man sparked public outrage.

In the video of the February incident, police cars chase a stolen SUV and, after the SUV crashes, a girl in a red sweatshirt starts running away from the scene. Two officers give her chase. One tackles her to the ground, and the other, Askew, appears to kick her in the head twice, puts handcuffs on her wrists and then drags her to a standing position by her cuffs.

The officers were answering a 911 call in which a woman said she had been robbed at gunpoint, the arrest report said, according to WPLG-TV. Askew told the City of Miami's Civilian Investigative Panel that he kicked the girl to make her keep her head down, and that he had feared for the safety of himself and his fellow officers as it was an armed robbery.

A report from the panel said the police department found Askew negligent in his duty, but did not think he used excessive force, WPLG reported. The teenage girl was charged with armed robbery and grand theft but she denies robbing anyone.

The investigative panel will continue to probe the incident, according to its report.

The Miami Police Department did not immediately respond to ABC News' request for comment.