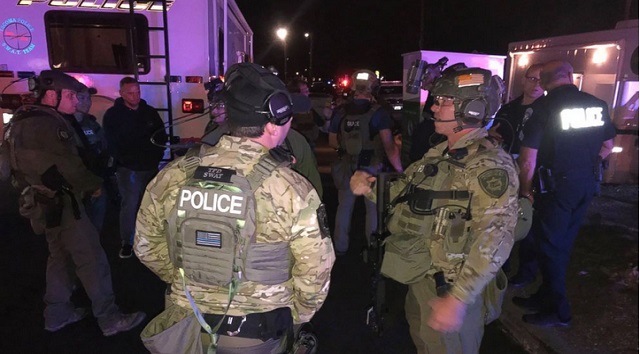 Pierce County Sheriff's Department(TACOMA, Wash.) — A man armed with multiple guns including long rifles and wearing body armor allegedly took a hostage inside an auto repair business, prompting a standoff with police in Tacoma, Washington, according to authorities.
The suspect, whose identity has yet to be released, was shot by a SWAT officer but was uninjured because of his body armor, police said. No hostages or responding officers were injured.
Helicopter video shows the moment when the suspect turned himself in to authorities.
The incident began about 7:40 p.m. Thursday night when the suspect allegedly tried to rob a tire store before fleeing to a nearby auto repair business where he took an employee hostage, police said. Shortly afterward, police, including a SWAT team, arrived on the scene.
"The suspect continued to fire numerous shots as he appeared to barricade himself inside the business with the hostage," the Pierce County Sheriff's Department said in a statement. "Our SWAT team attempted to make contact with the suspect and to engage in negotiations, but the suspect continued to fire rounds toward deputies."
Around 8 p.m. local time, deputies rescued the hostage, according to the Pierce County Sheriff's Office.
An hour and a half later, the SWAT team exchanged gunfire with the suspect, who later walked out of the business and was arrested.
The standoff lasted about two hours.