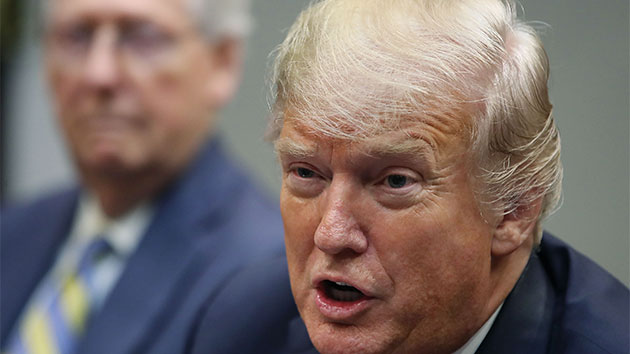 Mark Wilson/Getty Images(WASHINGTON) — While Trump Cabinet officials came out one by one to deny they wrote that explosive New York Times op-ed by an anonymous senior administration official, a denial may not be enough for President Trump and some of his allies.

Republican Sen. Rand Paul of Kentucky urged the White House to make anyone with a security clearance take a lie detector test.

Trump, during a gaggle with reporters aboard Air Force One on his way to Fargo, North Dakota, said that the idea has been suggested to him as a way to find out who penned the nearly 1,000-word piece that claimed some administration officials are actively working as a “resistance” against his impulsive decisions and have questioned his mental fitness behind the scenes.

“A lot of people have said they didn’t do, almost all of the high-level people have said that. When you say that and if it were you, you would be shunned for the rest of your life. Eventually, the name of this sick person will come out,” he said.

Washington has been engaged up in a paranoid game of whodunit as current and former administration officials point fingers at a potential culprit.

Ally and frequent golf partner of Trump, Republican Sen. Lindsey Graham of South Carolina, said that he’s spoken to the president since the op-ed’s publication and he’s “pissed” and “feels betrayed.”

Graham said he thinks the op-ed is a new line of attack from the left because there’s no evidence to prove Trump has colluded with the Russians.

“This to me is a signal that there’s nothing there with Russia in terms of the president working with the Russians during his campaign,” Graham said. “The next line of attack is a man unfit for office, he’s crazy.”

But he ruled out hunting down the author with a lie detector.

“Cause what are you going to do? Take a lie detector test to the entire government?” Graham said.

The president admitted that he does not know where in the administration the author works. Because the op-ed largely focuses on national security, administration fingers have been pointing at suspects in the State Department or National Security Council.

“You try to get little telltale signs,” Trump said. “But maybe it’s nobody. And maybe the Times did it.”