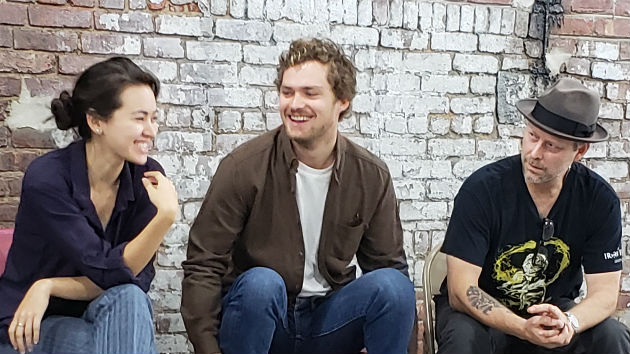 On the heels of last year's original season — which was drubbed by some critics for fight scenes that were called "lackluster" — actor Finn Jones' super-powered martial artist, aka Danny Rand, is back in action.

The character was better received when the subsequent superhero team-up series The Defenders debuted on the streaming service. He also briefly appeared in season two of Luke Cage, with Jones seeming much more comfortable in the role.

That was no accident. This time, producers gave ample time for a new stunt coordinator, Creed and Black Panther veteran Clayton Barber, to train Jones, as well as co-stars Jessica Henwick, Alice Eve, and other cast members.
"The way you create that comfort, is allowing space in the schedule to be comfortable," Jones told ABC Radio of his portrayal. "And so…post-Defenders. I was adamant…in making sure that there was space for me to thrive and luckily [producer] Raven [Metzner] wanted that… Clayton wanted that. Everyone that they brought to the table that was fresh this year wanted the best for the show, they wanted the best for the character, and they wanted the best for me."

For his part, Barber explains, "I said to [Jones]…'We're going to do this together as a family. I'm going to coach you. You're going to play quarterback. I expect you to go to the Super Bowl. Give me a hug.' That's exactly what I do. I look in their eyes and shake their hand and make a verbal contract with them. And if you break that contract, that's on you…And they buy into it. They go, "You know what? You're right."

That training took place in a facility in Brooklyn, New York, not far from when Jones lives. ABC Radio was given a tour of the gym, complete with a demonstration from Barber and some members of his stunt team.

He says of the process of training his actors, "Once you break a sweat with someone, and you see that that person is trying to give as much as they can and they see that you're trying to get as much can, you do for a very special bond, because you are in this together — you're in the same car."

Jessica Henwick, who plays Danny's love interest Colleen Wing, is quite convincing onscreen as a martial arts master, despite having no prior experience. She explained why that might be. "I come from a dance background when I was a kid, so…I'm good at picking up choreography. I think all actors are like this: I have a very good short-term memory. So, I'll learn a fight in an hour or something. But if you came to me the day after the fight and asked me to do it again I couldn't do it. And if you are if you ask me what dialogue I had the next day I'm like, 'I don't even know what scene we filmed.' It's just gone. There's just a hole in my memory. I should really get that checked," she laughs.

Jones explains where Danny is when the show picks up. "Yeah he's a bada**, but he's also reckless and that's kind of cool. But at the same time like he can't do that forever, because he's gone around he's smashing s*** up and he's burning himself out. He's enjoying the power so much he's not being responsible to his own body and to the people around him, you know, like the way that he treats Colleen. He thinks he's doing the right thing because he's protecting this city. But what he's not realizing is he's not completed yet, because he is not taking into account other factors. And that's the journey that Daniel goes on this season — is it's a journey of finding balance."