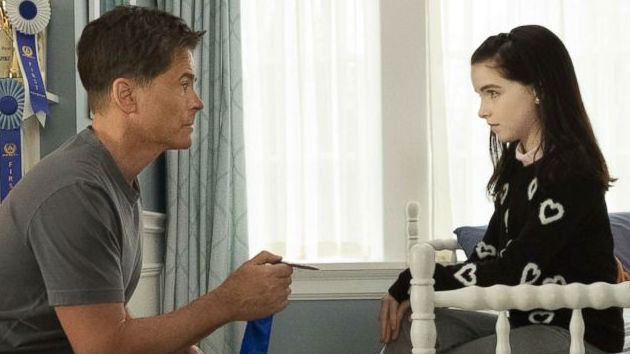 Lifetime(NEW YORK) — Rob Lowe is no stranger to being the star on the TV screen, but the award-winning actor put on his director's hat to pull double duty and top billing for his latest project, a remake of the 1950's cult classic The Bad Seed.
"Directing it was a dream," Lowe said Thursday on Good Morning America. He enthused over his young lead actress, 12-year-old McKenna Grace, saying she "gives the performance of a lifetime in this."
Lowe explained, "The original actress who played the bad seed was nominated for an Oscar, so we needed to find somebody worthy," adding, "When I was acting with her, I felt like I was looking into the eyes of like a Jodie Foster or an Allison Janney or a Maggie Smith — some of the great actors that I've worked with."
Lowe said he had a very "specific" vision for the film. "The job of a director is to have a point of view that is so specific to you that the movie could not be made without it," he explained. "When I read [The Bad Seed] as an actor, I thought, 'I have such an idea for this movie,' I really want to do this and it's an ability for me at this point in my life to use all of the knowledge that I've built up over so many years of doing what I've been doing."
And he said those scenes that he could "just direct" were "the best."
"Oh, my gosh. No makeup, no hair, just direct, — when I had to direct myself, that was not my favorite. Turns out I'm very difficult to work with," he said laughing.

A bipartisan coronavirus relief bill would be easier to pass: GOP Sen. Rob Portman
Katharine McPhee welcomes first child with husband David Foster
NY teens 16 and older who are homeless, jailed or in foster care now eligible for COVID-19 vaccine
Disney+ announces release dates for ‘Star Wars: The Bad Batch’, ‘Loki’, and more
Allison Janney reflects on eight seasons of ‘Mom’ as “one of the great honors of my life”
12-year-old allegedly shot and killed home intruder during armed robbery