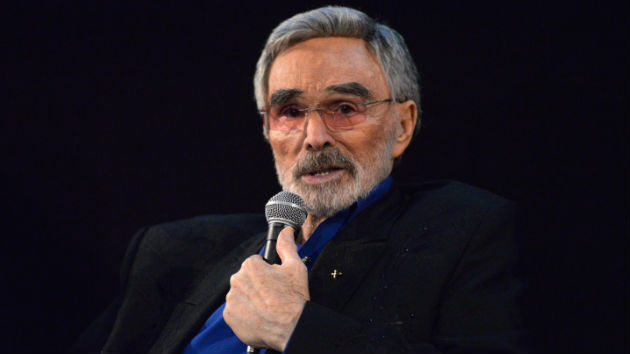 Michael Tullberg/Getty Images(JUPITER, FL)– Burt Reynolds, the iconic star of movies like Smokey & the Bandit, The Cannonball Run, Deliverance, Boogie Nights and Semi-Tough, has died at the age of 82, ABC News has confirmed.

Reynolds got his start in television and the theater, and also had some minor film roles. However, after he appeared in a 1972 issue of Cosmopolitan as the mag's first celebrity male nude centerfold, he landed his first major starring role, in the controversial hit movie Deliverance.

Soon, Reynolds' tough-guy charm and ability to play both comedic and dramatic roles made him the country's top box office draw in the '70s. Among his most notable films: 1974's The Longest Yard, 1977's Semi-Tough, and, that same year, his most successful movie, Smokey and the Bandit, which spawned a number of sequels.

Despite several box office bombs, Reynolds continued to be a major draw throughout the decade: Other movies included The End — which he directed — as well as Starting Over, Silent Movie and Hooper.

Reynolds' box office popularity continued through the early '80s with The Cannonball Run and its sequels, as well as The Best Little Whorehouse in Texas, The Man Who Loved Women and Sharky's Machine. As his movie career waned, the actor moved to Jupiter, Florida, opened a local theater, and then switched back to TV.

In the 2000s, Reynolds continued working in movies and TV, including guest roles on The X-Files, Ed and My Name is Earl, and parts in the film adaptation of The Dukes of Hazzard and the comedy remake of The Longest Yard with Adam Sandler.

According to TMZ, Reynolds had been cast in Quentin Tarantino's upcoming film about Charles Manson, Once Upon a Time in Hollywood, but he hadn't shot his scenes yet. He was to have played George Spahn, the owner of the ranch where Manson and his Manson family lived.

In addition to his acting work, Reynolds' love life made him a tabloid fixture. He was married to actress Judy Carne and then, famously, to blonde bombshell Loni Anderson, with whom he adopted a son, Quinton. He also had long-term relationships with Dinah Shore and Sally Field, and was linked also linked to country star Tammy Wynette, tennis star Chris Evert, and actresses Adrienne Barbeau and Lucie Arnaz.