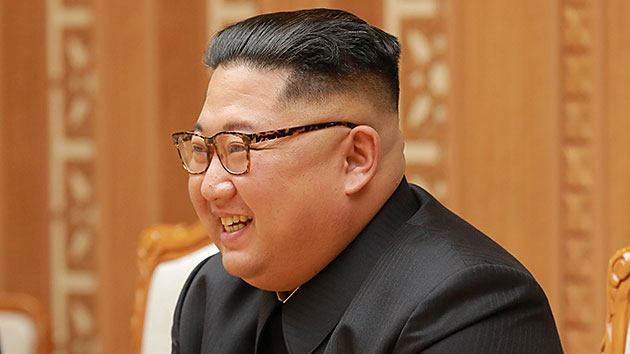 South Korean Presidential Blue House/Getty Images(PYONGYANG, North Korea) — North Korean leader Kim Jong Un's trust in U.S. President Donald Trump remains unchanged, according to South Korea's special envoy, who met with Kim in Pyongyang on Wednesday.
"Chairman Kim emphasized that he has never made a negative comment about Trump," Chung Eui-yong, South Korea's top national security adviser, said at a media briefing on Thursday.
Kim also reaffirmed his nation's commitment to "actively engage in denuclearization if the countermeasures are taken simultaneously" and "expressed frustration that his goodwill is not being properly delivered to the international community."
Kim stressed to Chung that North Korea's nuclear tests have become permanently impossible at Poongye-ri because two-thirds of its tunnel is destroyed. The dismantled missile-engine test site at Tongchang-ri is North Korea's only test facility.
This means North Korea "will completely halt long-range missile tests in the future, and is a very practical and significant step," Chung added.
North Korean state media supported what Kim told South Korean officials.
"Supreme leader said he fully supports and sympathizes with" President Moon Jae-in of South Korea, with Kim saying he "remains unchanged in his determination to strive hard to bring the fellow countrymen better results at an early date, bearing in mind the mission before the nation and its expectation," Korean Central News Agency reported, citing Kim's reply to a personal letter from Moon.
The two Koreas also agreed to hold a third summit Sept. 18-20 in Pyongyang. The two leaders will again discuss making progress on denuclearizing the peninsula, relieving military tensions near the border and opening a joint liaison office in the Kaesong Industrial Complex.
The envoys delivered a message from Trump to Kim upon Trump's request to Moon during their phone call on Tuesday, according to Kim Eui-kyeom, South Korea's presidential spokesperson, who did not specify what exactly the message contained. Trump also requested that Moon "play the role as a chief negotiator representing both North Korea and the United States" during the call, Kim told reporters. Kim's reply to Trump's message likely will be delivered later on Thursday during a phone call with John Bolton, a national security adviser.
Moon and Trump are planning to meet at the U.N. General Assembly later this month.
Kim said he agreed with South Korea's position that an official declaration ending the Korean War would help build mutual trust between the nations.
"Kim expressed his stance that a weakening of the United States-South Korea alliance or United States' troops’ withdrawal from Korea has nothing to do with the war-end declaration," Chung said.
The two Koreas are aligned in formally ending the war, a measure that has helped thaw relations between the two countries. For the U.S., denuclearizing remains the top priority.
"Moon and Kim are pushing for a peace declaration to notionally end the civil war. The U.S. says, 'Eliminate North Korean nuclear weapons first,'" said Stephen Ganyard, an ABC News contributor and former deputy assistant secretary of the state. "Moon, Trump and Kim all have different agendas and goals. Someone will be forced to give in this month. Might be Trump if Moon sides with Kim."
Copyright © 2018, ABC Radio. All rights reserved.