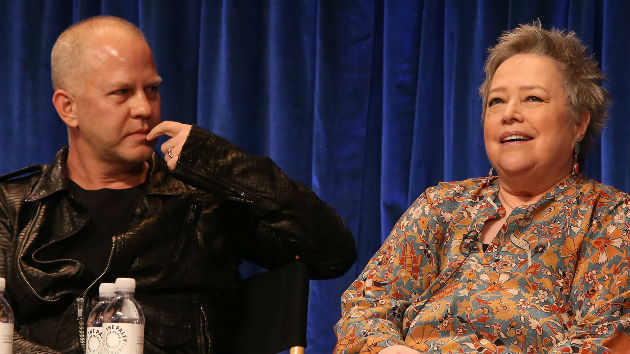 (L-R) Ryan Murphy, Kathy Bates – Patrick McElhenney/FX (LOS ANGELES) — After weeks of teasing, FX released a full trailer for American Horror Story: Apocalypse on Wednesday, and as the title suggests, the world is coming to and end.

The video opens with scenes of destruction and people fleeing for their lives as a voiceover delivers the message: “No need for the news anymore, the chaos has won,” followed by hordes of pedestrians running for their lives.

Meanwhile, Billy Eichner is stranded in Santa Monica, while fellow returning stars Leslie Grossman, Evan Peters, Billie Lourd and Joan Collins are on an ill-fated airplane flight that leaves them at a place called Outpost 3, where we are introduced to Sara Paulson's latest AHS character.

The trailer also contains references to the Ryan Murphy-produced show’s first and third seasons — Murder House and Coven, respectively — including another returnee, Coven's Emma Roberts. The upcoming installment is reported to be a crossover between the two seasons

The video ends with an appearance by newcomer Cody Fern, who asks Kathy Bates “What do you think?” Her answer, “Hail Satan.”

Woo hoo! Fox renews ‘The Simpsons’ for seasons 33 and 34
Meet Kathy Hochul, the woman who could succeed Cuomo if he leaves office
‘Degrassi: The Next Generation’ star Jahmil French dead at 29
Scientists inch closer to explaining the mysterious ‘brain fog’ symptom of COVID-19
‘This has been a huge mental toll’: Working moms still struggle a year into the pandemic
Fallout from Texas energy crisis that left millions in the dark continues