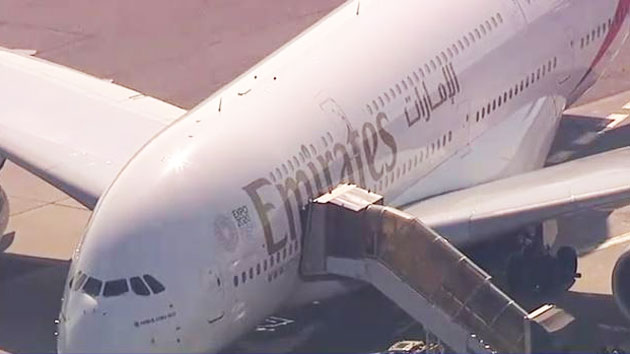 ABC News(NEW YORK) — Ten sick passengers on an Emirates flight from Dubai were taken to a hospital after the flight landed in New York City Wednesday morning, according to a spokesman for Mayor Bill DeBlasio.
Nine more people with symptoms were evaluated at the airport and refused medical attention, Eric Phillips, the mayor's press secretary, wrote on Twitter. All of the other passengers are now off the plane and health officials are working to determine the cause of the illness, Phillips added.
Emirates flight 203 had declared a medical emergency and landed at John F. Kennedy airport at 9:10 a.m., the Federal Aviation Administration said in a statement.
The plane was quarantined and kept away from the terminal after it landed, Phillips said.
The flu is being investigated as a possible culprit, two sources told ABC News.
Officials from the Centers for Disease Control and Prevention boarded the plane to evaluate the situation before passengers disembarked, according to the Port Authority of New York and New Jersey.
Photos showed disembarking passengers getting their temperatures checked.
The CDC said in a statement that it is working with authorities to treat over 100 passengers and crew members who reported having symptoms ranging from a cough to a fever.
"CDC public health officers are working with Port Authority, EMS, and CBP officials to evaluate passengers, including taking temperatures and making arrangements for transport to local hospitals those that need care," the statement read. "Passengers who are not ill will be allowed to continue with their travel plans, and if necessary will be followed up with by health officials. There were approximately 521 passengers on the flight. We will have more information as passengers and crew members are evaluated."
This is a developing story. Please check back for updates.
Copyright © 2018, ABC Radio. All rights reserved.