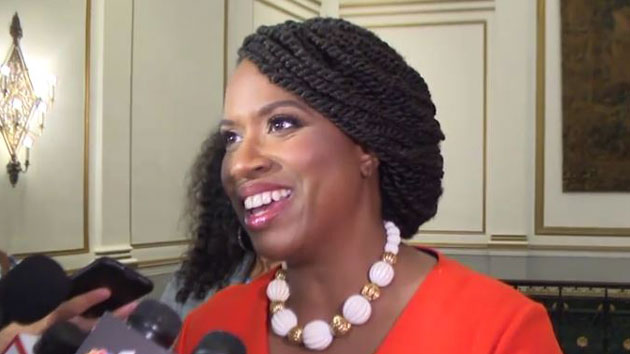 ABC News(BOSTON) — Boston City Councilor Ayanna Pressley defeated longtime Rep. Mike Capuano in a closely watched primary Tuesday night, with energized Democratic voters opting to send a dynamic new voice promising bold leadership and demanding change to Washington over a veteran progressive.
Capuano, who was thought to be safe despite the challenge from Pressley, conceded just ninety minutes after polls closed, as returns showed him performing poorly in his hometown of Somerville, where he once served as mayor.
“You saw what I saw — that these times demanded more from our leaders and our party,” said Pressley, acknowledging the message her victory sent to Democrats as she thanked supporters Tuesday evening. It doesn’t just matter that Democrats take back power in Congress, she added, but it matters who those Democrats are.
“It seems like change is on the way,” Pressley said after her audience erupted minutes earlier when Capuano came on stage to concede, cheering, "Change can't wait!"
In his concession, Capuano recognized that a transformation was afoot in the region he represented for nearly two decades, utilizing similar rhetoric.
"The district wanted a lot of change," Capuano said at the top of his speech, adding, "This is life, and this is OK. America is going to be OK. Ayanna Pressley is going to be a good congresswoman, and I will tell you that Massachusetts will be well-served."
Her victory on Tuesday night is the latest indication Democrats across the country may be eager for new voices and faces to represent their party.
The 10-term congressman pitched his experience in Washington and record of progressive votes to constituents, arguing that he was better positioned to take on the Trump administration.
"Experience matters," Boston Mayor Marty Walsh, a top supporter of Capuano's, told reporters Tuesday afternoon.
But Pressley, 44, won over voters across the district with a promise to shake up Washington, with many voters willing to support a candidate with less government experience who said she'd better represent the majority-minority district.
With no Republican challenger looming in the deep-blue district, Pressley is all but assured to win election in November and become the first black woman to represent Massachusetts in Congress, doing so in a district once represented by President John F. Kennedy.
Pressley, who served as an aide to former Sen. John Kerry and former Rep. Joe Kennedy II, made the case for a new generation of liberal leadership in Washington, and to take a more activist approach in taking on President Donald Trump.
"If we can't be bold or visionary or leading from this seat, there's no other seat in the country that has these progressive bona fides and the opportunity to be unrestrained and unencumbered," she said at a recent event.
Capuano, 66, who opposed the Iraq War and championed progressive causes for years, said he'd hoped voters would take a look at his record and the results for his district. Capuano could have potentially been in line for a subcommittee gavel on the House Transportation Committee had he won and Democrats reclaimed the House.
"When I go to vote, I want the best fighter I can get on the issues I care about. If I find two or three or 10 candidates who do, then I look for the person who can actually deliver on the words," he said at a recent event with canvassers.
Capuano has helped bring millions of dollars to his district for public transportation, housing and community health centers. He promised to challenge the administration on immigration and gun control, among other issues, if sent back to Washington.
"Words are easy, every politician has them and that's fine, and I think in this case it's easy to prove — who has delivered, not just who will deliver," he said.
Gina Richard and Dave Sargeant of Roslindale said they'd planned to stick with Capuano, but praised Pressley's record.
"He's been a real champion for democratic values, and I don't want to replace what's working," said Sargeant, 34. "If she was running in a different race, I would consider voting for her, but she's up against a real competitor."
"In many cases, these races are decided on factors that are not policy positions, like the personal histories and trajectories of the candidates," Costas Panagopoulos, a political science professor at Northeastern University, said in an interview with ABC News. "Their demographics can play a role."
Some observers saw parallels between the Boston-area race and the victory earlier this summer by Alexandria Ocasio-Cortez, a former Sen. Bernie Sanders organizer, over 10-term incumbent Rep. Joe Crowley in New York.
But Capuano, who still lives in his district, was popular with his constituents and focused extensively on campaigning for re-election. He even canceled a vacation to campaign once Pressley entered the primary.
Both candidates said they were likely to vote along similar lines in Congress if elected, offering voters less of a contrast on major policy positions.
Pressley took a more progressive stance on immigration, vowing to abolish U.S. Immigration and Customs Enforcement and oppose funding for a border wall, while Capuano has said he would support funding a wall in exchange for larger immigration reforms sought by Democrats.
Pressley, who has also pledged not to accept money from corporate political action committees, also criticized Capuano's comments in a recent debate about NFL players' protests during the national anthem, when he said he "100 percent" agreed with former quarterback Colin Kaepernick's message but said his actions were counterproductive.
In other parts of the state, additional Democrats faced spirited primary challenges. Reps. Richard Neal and Stephen Lynch were each able to fend off strong primary challenges and protect their respective spots on the general election ballot.
Ten Democrats are vying to replace retiring Rep. Nicki Tsongas in the state's 3rd congressional district. The race had yet to be decided, as of 9:30 p.m. ET.