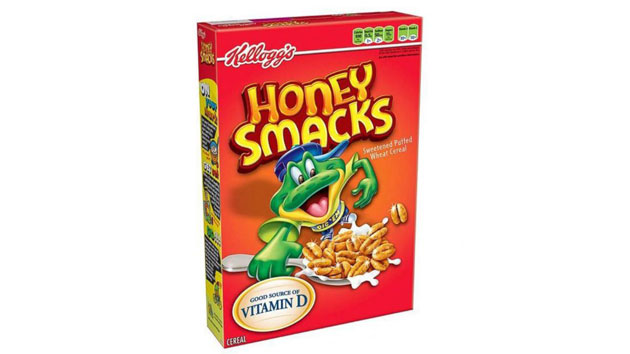 @CDCgov/Twitter(ATLANTA) — Another 30 people have been reported sick from Salmonella infections linked to Kellogg’s Honey Smacks Cereal, bringing the total to 130 cases, the Centers for Disease Control and Prevention said.
Both the CDC and the U.S. Food and Drug Administration are reminding people not to purchase or consume the cereal that has been recalled since June.
"Retailers should not sell any Kellogg’s Honey Smacks cereal. It could be contaminated with Salmonella and make people sick," the CDC said in a statement. "If you see Kellogg’s Honey Smacks cereal for sale, do not buy it."
People infected with Salmonella Mbandaka, the strain found in Honey Smacks, typically get sick 12 to 72 hours after consuming the food. Symptoms include diarrhea, fever and stomach cramps and can last from four to seven days. Most people recover on their own without medical treatment. But if the infection is severe, it can spread to the blood stream and other parts of the body and can require hospitalization.
The Kellogg Company recalled Honey Smacks cereal on June 14 after a wave of Salmonella infections were reported.
Since then, 30 more people from 19 states, which now include Delaware, Minnesot and Maine, have reported illnesses that have been linked to the outbreak, according to CDC.
"Even if some of the cereal has been eaten and no one got sick, throw the rest of it away or return it for a refund," the CDC said.
Those who store cereal that looks like Kellogg’s Honey Smacks in a container without the packaging and may not remember the brand or type are also encouraged to throw the product away. Any containers that held the cereal should be thoroughly washed with warm, soapy water before re-use to remove harmful germs that could contaminate other food.
In total, 130 people from 36 states have been reported with Salmonella-related illnesses connected to the outbreak. No deaths have been reported.
An investigation into the multistate outbreaks is being conducted by the CDC and the FDA, along with public health and regulatory officials in several states, the CDC said.
The FDA also urged consumers to discard any Honey Smacks they may find in their homes and to report any Honey Smacks offered for sale in their area to the FDA consumer complaint coordinator.
Kellogg said in the statement that it stopped producing Honey Smacks cereal and is offering refunds.
"We ceased production of Honey Smacks cereal in June when we learned of the possible connection to the Salmonella outbreak and have not yet shipped any new cereal to retailers," the company said in a statement. "Kellogg is asking that people who purchased potentially affected product discard it and contact the company for a full refund."
Copyright © 2018, ABC Radio. All rights reserved.

School debate rages on, despite CDC effort to set federal benchmarks
CDC: US life expectancy drops one year in first half of 2020 amid coronavirus pandemic
Victims of 9/11-related illnesses urged to register for compensation as deadline looms
New CDC guidelines do ‘a lot of things’ to protect teachers: Fauci
CDC says schools can open safely even in COVID-19 hot spots if certain steps are taken
There’s a light at the end of the cereal aisle for Grape-Nuts fans