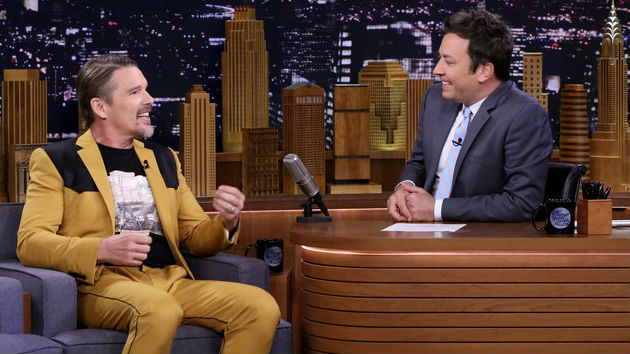 NBC/Andrew Lipovsky(NEW YORK) — The Highwaymen — or at least a recreation of the country supergroup, featuring Jimmy Fallon, Ethan Hawke, Ben Dickey and Charlie Sexton — reunited on Tuesday's Tonight Show to debate the pros and cons of going "On the Road Again."

Hawke and his Blaze co-stars Dickey and Sexton — playing Willie Nelson, the late Waylon Jennings, and Kris Kristofferson, respectively — joined Tonight Show host Fallon, made up as the late Johnny Cash, for a modified rendition of Nelson's "On the Road Again."

However, Cash — a.k.a. Fallon — had a different idea: "I like stayin' here/Life is better when I'm stayin' here/Just sit at home I watch TV and have a beer/Honestly, I'd love to just stay here."

"Kristofferson" and "Jennings" both agree with "Cash," who ultimately convinces the faux Nelson, explaining they could all enjoy the popular online video game Fortnite, in which up to a hundred players build forts while collecting weapons and materials to fight other players.

"The last man alive is the winner, says Fallon, adding, "It's sort of like Hunger Games meets Minecraft."

Later, Hawke said he and his dad met the real Willie Nelson once, and Willie "offered us a hit off his joint" — an offer they passed on and later regretted.

Hawke says he and Nelson crossed paths again several years later, and Nelson "slip[ed] a joint in my hand and says, 'Say hi to your dad'."

Blaze, based on the life of country singer Blaze Foley, is in theaters now.