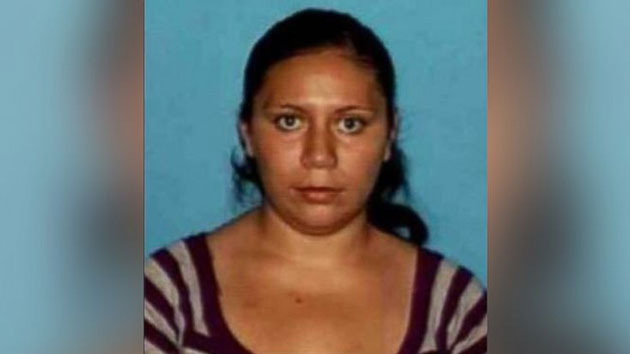 Fresno Police Department(FRESNO, Calif.) — Police are seeking the arrest of a 32-year-old woman in Fresno, California, after alleging that she faked her own kidnapping and robbery.
Maria Gonzalez, who owns a trucking business, turned up at a house in the city on Saturday partially bound and gagged and with an injury to her head, saying that she had been abducted at gunpoint and robbed of the $9,000 she had in her purse to pay her employees. She also allegedly later told police she may have been sexually assaulted.
But two days later, after an extensive investigation and 2.5 hours of police interrogation, Gonzalez confessed it was all a hoax, police say.
"The reality is she did not have the $9,000 to pay the subcontractors and that's why she made up the story," said Fresno Police Chief Jerry Dyer at a press conference on Monday.
Gonzalez had gone so far as to tie up her hands behind her back with a telephone cord, and fake injuries, Dyer said. At the hospital, police say that she sobbed and said she had stopped her car for two dogs crossing the road when two black men wearing masks entered the car, one armed with a handgun, bound her arms, stuffed a rag in her mouth and told her to drive. She told police she lost consciousness but woke up to find her money gone, a bump on the side of her head and "moisture in her underwear" that she suspected was from being sexually assaulted.
As Fresno detectives dug deeper, they began to find inconsistencies, said Dyer. For example, the robbers took Gonzalez’s money but left other valuables in her purse intact. There were also only one set of footprints found near her car.
And according to police, Gonzalez's memory appeared to be erratic — she could explain in great detail how she had managed to get out of the backseat of the car and untie herself, but many other details escaped her.
Finally, when police showed her a video of the entire area where the alleged kidnapping had taken place, Gonzalez admitted that she made it all up to get out of paying her subcontractors.
When ABC's television station in Fresno, KFSN, tried to contact Gonzalez, she refused to come out of her house. Her grandfather said she was traumatized and hadn’t told him anything, KFSN reported.
Gonzalez was released from police custody on Sunday night, but police are working to get an arrest warrant for her.
“It is important that when people file a false police report, especially of this magnitude, that we hold them accountable for doing so,” said Dyer. “Not only did this create an enormous amount of work and pulled our detectives off other cases that they could have been working or should have been working, but it created a lot of fear in our community.”
Copyright © 2018, ABC Radio. All rights reserved.