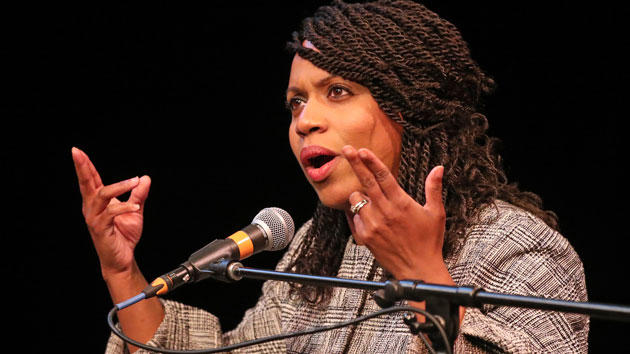 Matthew J. Lee/The Boston Globe via Getty Images(BOSTON) — As she greeted voters in Cambridge ahead of primary day, Boston City Councilor Ayanna Pressley, who is running to unseat Rep. Mike Capuano, D-Ma, turned to football.
After listing several of her policy disputes with the veteran congressman, Pressley mentioned that she is "standing in solidarity with the NFL players for why they’re taking a knee" in an effort to "elevate the issue of police brutality."
"I support both the cause and the tactics, while my opponent does not," she told reporters.
Pressley and her campaign have seized on a topic that emerged in the candidates’ last debate in August, when Capuano said he supported former NFL player Colin Kaepernick’s right to protest "100 percent," but questioned the productivity of NFL players' demonstrations, after the New York Times had revealed video of him discussing the issue in a 2017 town hall.
"I thought that particular action divided America, because he chose to do it during the national anthem," Capuano said of Kaepernick, who started the demonstrations in 2016 and has not played in the NFL for the last two seasons.
"I just thought it could have been done in a way that would have [brought] more people into the discussion, rather than actually anger an awful lot of America," Capuano said.
The former San Francisco 49ers quarterback became one of the faces of Nike’s new ad campaign for the 30th anniversary of its "Just Do It" slogan on Monday. He’s also suing NFL owners, charging them with colluding to keep him out of the NFL.
With both Capuano and Pressley acknowledging that they would cast many of the same votes in Congress, the divergent answers the two candidates have given on the issue is indicative of the pitch Pressley is making to voters in the majority-minority district to bring a different perspective to Washington, supporters said.
"She’s not only going to represent the 7th [congressional district], she’s going to represent a whole lot of people across this county who for far too long have been marginalized, left out and left behind," Massachusetts Attorney General Maura Healey, who has endorsed Pressley, said to supporters at the campaign’s headquarters in Jamaica Plain Monday evening.
Pressley has focused her campaign on economic inequality in the majority-minority district, and has also repeatedly called attention to gun violence and criminal justice reform. A survivor of sexual assault whose father battled drug addiction, Pressley has linked her lived experience to the community and voters in the district.
"I know that change can’t wait for those brothers at [Massachusetts Correctional Institute] Norfolk and the sisters in … Framingham," she told faith leaders at Boston’s Roxbury Presbyterian Church on Sunday, referencing two nearby prisons.
Rochelle Wade, 49, a pastor from Dorchester who hasn’t voted in recent years, said she plans to vote for Presley because of her ability "to make a difference in our community."
"This is a time for change," she said.
Capuano, the former mayor of Somerville, is pointing to his progressive actions as mayor and work over two decades of legislating in Washington. One of the earliest critics of the Iraq War and advocates for single-payer health care in Congress, he’s also helped direct millions of dollars to Boston to rebuild public transit and housing in the city.
After a Labor Day breakfast with local politicians and union leaders, Capuano dismissed questions about Pressley's criticism of his comments about Kaepernick and the NFL players' demonstrations.
"I don’t know what my opponent has been saying. I’ve been busy talking to my constituents," he said.
Capuano also said that the "Blue Lives Matter" bill he voted for in Congress to beef up federal penalties for assault and attempted assault of police officers didn’t go far enough to incorporate concerns raised by activist groups.
"I do think that we do have a concerted issue that relates to the relationships of some police departments with some communities," he said.
"I have never voted on a perfect bill. It was a good bill for what it did. It should’ve done more," he added about the bill and his vote, which Pressley had criticized in their earlier debate.
Copyright © 2018, ABC Radio. All rights reserved.