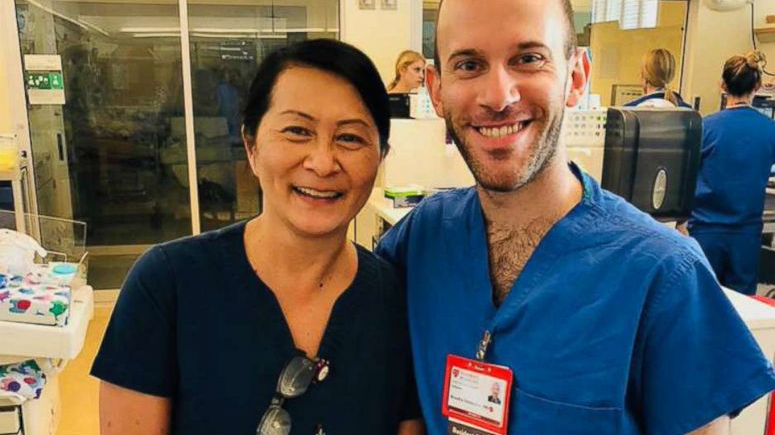 Lucile Packard Childrens Hospital Stanford(STANFORD, Calif.) — A California nurse just discovered that she'd actually met a new coworker before — 28 years ago.
Vilma Wong, who'd been working at Lucile Packard Children's Hospital Stanford for more than 32 years, met Brandon Seminatore, 28, in August. Seminatore, a second-year pediatric resident completing a child neurology residency at Stanford University, had joined Wong's team, according to the statement from Lucile Packard Children's Hospital.
"I asked who he was and his name, and last name sounded very familiar," Wong said in the statement. "I kept asking where he was from, and he told me that he was from San Jose, California, and that, as a matter of fact, he was a premature baby born at our hospital."
Wong's curiosity grew, so at one point she just asked Seminatore.
"I asked him if his dad was a police officer," she said. "And there was a big silence, and then he asked me if I was Vilma, I said yes."
Seminatore's mother had asked him to look for nurse name Vilma, who took care of him when he was a baby.
"I was in shock initially but overjoyed to know that I took care of him almost 30 years ago," Wong said. "And now he's as a pediatric resident to the same population he was part of."
After Brandon informed his parents about finding his primary nurse, his parents texted him the picture they had of Vilma holding him on her lap when he was a baby.
Seminatore said his parents told him about his premature condition as a baby and that they had to keep him with a nurse to make sure he was OK.
"I needed an incubator to keep me warm, a ventilator to help me breath, and had near endless pokes and prods to make sure I was healthy and growing appropriately,” Seminatore said in the statement. "Meeting Vilma was a surreal experience. I never expected to meet a provider who took care of me when I was a baby."