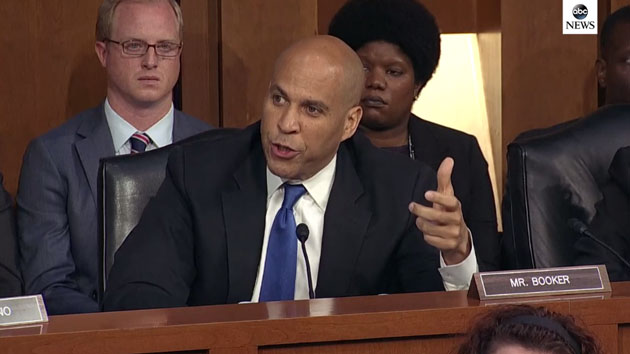 ABC News(WASHINGTON) — Confirmation hearings for Supreme Court nominee Brett Kavanaugh began with protests Tuesday, as Democrats objected to what they say is a lack of information about the judge's record and demanded the proceedings be delayed.
The Senate Judiciary Committee was to hear Kavanaugh speak publicly for the first time since his nomination. Senators are expected to push Kavanaugh on various issues throughout the week including abortion, executive privilege, and Kavanaugh's previous legal decisions.
As chairman Chuck Grassley attempted to gavel in the hearing and with protesters shouting in the background, Democrats objected, saying that a release of additional documents late Monday night did not give them enough time to properly vet the information.
Before the hearing began, Democrats said they were going to the hearings "under protest" as the Trump White House claimed executive privilege in withholding documents from Kavanaugh's time working at the White House under President George W. Bush.
"Democrats strongly object to moving forward when so much of his record remains secret. We are shocked at the efforts being taken to jam this nominee through and hide his record from the American public. We go to these hearings under protest," ranking member Dianne Feinstein said at a news conference Tuesday morning.
After protesters in the audience were removed and the room quieted down, Kavanaugh said, "I am honored to be here today" and introduced his family.
Grassley pushed back against the Democrats, saying that it is appropriate to withhold some of the documents from Kavanaugh's time at the White House because he was a senior lawyer whose advice to the president on issues should remain confidential. He said the committee has received 307 of Kavanaugh's written opinions, more than 10,000 pages of his writings, 17,000 pages of speeches, articles and other documents, and 483,000 pages of documents from his work at the White House.
"This committee has more materials for Judge Kavanaugh's nomination than we have had on any Supreme CJurt nominee in history. Senators have had more than enough time and materials to adequately assess Judge Kavanaugh's qualifications and so that's why I proceed," Grassley said.
Grassley denied a vote on a motion from Sen. Richard Blumenthal, D-Conn., to delay the hearing, saying that the Democrats are out of order and it was not appropriate to bring up the motion during the open hearing.
This is a developing story. Please refresh for updates.
Copyright © 2018, ABC Radio. All rights reserved.