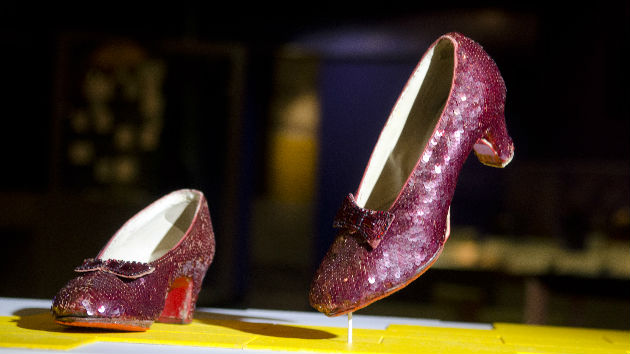 Photo by Kris Connor/Getty Images(MINNESOTA) — They're not going back to Kansas, but a pair of Judy Garland's iconic red slippers from The Wizard of Oz are about to be back home.
Authorities recovered a pair of the iconic ruby red slippers worn in the 1939 family classic film, wrapping up a years-long search for the sparkly kicks.The slippers, one of the props used in the movie, were stolen in 2005 from the Judy Garland Museum in Grand Rapids, Minnesota, FBI officials said Tuesday. Officials haven't released details of how the famous shoes were recovered.
The shoes were insured for $1 million, according to Newsweek. An anonymous donor also offered $1 million for the shoes' safe return, but that expired after 10 years.
Officials with the Minneapolis FBI, the North Dakota U.S. Attorney's Office and the Grand Rapids Police Department are scheduled to release more information at a press conference Tuesday afternoon.
The shoes are one of several pairs that were custom made for The Wizard of Oz's legendary star. At least two of the existing pairs are owned by private collectors, including a pair jointly acquired by actor Leonardo DiCaprio and film director Steven Spielberg for display at the Academy Museum of Motion Pictures.