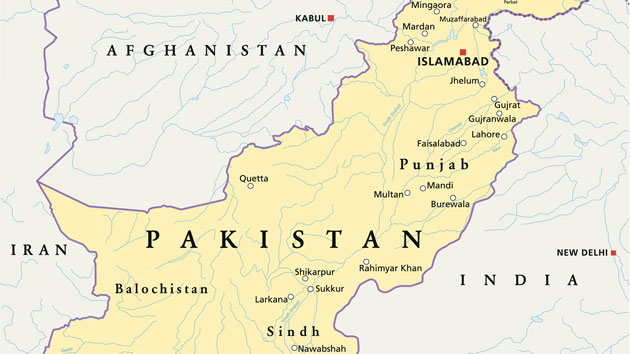 iStock/Thinkstock(WASHINGTON) — The Pentagon has canceled another $300 million in aid to Pakistan, bringing to $800 million the total cut in U.S. payments to the country this year.
The aid reduction is a sign of deteriorating U.S.-Pakistan relations and reflects the Trump administration's concern that the South Asian country is not taking a hard-enough line against terror groups.
"We continue to press Pakistan to indiscriminately target all terrorist groups, including the Haqqani Network and LET (Lashkar e Taiba) in the region," said Lt. Colonel Kone Faulkner, a Pentagon spokesman. Both are Islamic terror groups that operate within Pakistan.
The U.S. has over the last decade reimbursed billions of dollars to Pakistan for its counterterrorism efforts, aid known as Coalition Support Funds.
But the Trump administration announced in January that it was suspending almost a billion dollars in aid and reimbursements until Pakistan took tougher action against terror groups.
Following that announcement, Congress in March rescinded $500 million in reimbursements to Pakistan that had been included in the Defense Department's budget.
That still left $300 million available for Pakistan if Defense Secretary James Mattis decided the country had done enough against terrorism merit the payments.
But Mattis decided that was not the case, and the Pentagon now plans to use that $300 million on different programs.
"Due to a lack of Pakistani decisive actions in support of the South Asia Strategy the remaining $300M (actually $323.6M to include non-Pakistan funds) was reprogrammed by DoD in the June/July 2018 time frame for other urgent priorities before the funds expire on September 30, 2018," said Faulkner.
Reuters was the first to report the cancellation of the $300 million in reimbursements to Pakistan.
Copyright © 2018, ABC Radio. All rights reserved.