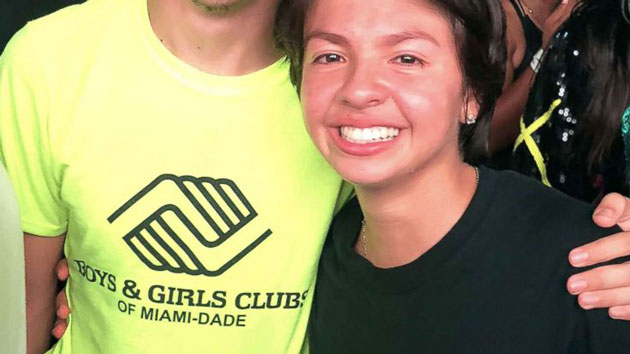 Boys and Girls Club of Miami Dade
Posted on September 3, 2018 by ABC News

Boys and Girls Club of Miami Dade(MIAMI) — The college dreams of two teens in South Florida are looking brighter — and a bit less stressful — after they were each awarded six-figure scholarships at Beyonce and Jay-Z's recent concert in the Sunshine State.
On Friday, Emily Garay, 17, of Miami Beach, and Jonathon Burgos, 17, of Kendall, were attending "On the Run II" at Hard Rock Stadium in Miami Gardens with their friends from the Boys and Girls Clubs of Miami-Dade.
PHOTO: Beyonce and Jay-Z in concert at On The Run II Tour in Miami, on Aug 29,2018.PictureGroup/EPA via Shutterstock
Beyonce and Jay-Z in concert at "On The Run II Tour" in Miami, on Aug 29,2018.
Garay, in her last year at Miami Beach Senior High School, learned that she'd been awarded a $100,000 scholarship from the BeyGOOD and the Shawn Carter foundations. The Boys and Girls Clubs of Miami-Dade said in a news release that the program had provided Garay a "safe haven" to grow since she'd joined its South Beach Club at the age of 9.
"Emily is the type of person that, once she sets herself to a goal, she will do what it takes to achieve it," the club's news release said.
Garay said the scholarship was a huge deal for her family — who had been trying to figure out how to pay for her college education. She plans to major in criminology at Florida International University.
"My mom was thinking of working for two jobs," Garay told CBS4 Miami. "We were just stressing ever since I started high school."
She said her parents came to her mind first when her name was called during Friday's concert.
"They now could have peace," she said. "This is the best thing that has ever happened to me in my life."
DJ Khaled, who was on hand to present the award to Garay, then announced that he'd be awarding his own $100,000 scholarship to Burgos.
Burgos joined the program's Kendall Club when he was a young child. The Boys and Girls Clubs said he was a senior at Southwest High School and "learned how to come into his own as leader by embracing what he learned at the Clubs."
Burgos wants to attend the Massachusetts Institute of Technology in Boston and major in electrical engineering.
"With this gift, I know I'm going to be able to accomplish anything now and maybe even more," Garay said.
Copyright © 2018, ABC Radio. All rights reserved.