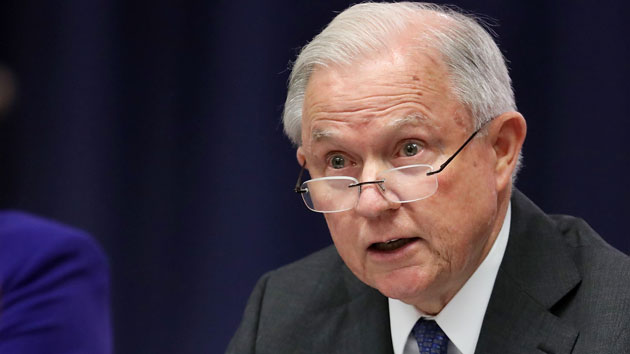 Chip Somodevilla/Getty Images(WASHINGTON) — President Trump found it apparently too hot outside to play golf this morning, but now inside the White House residence, he again seems to be getting hot under the collar — unleashing a fresh round of sharp criticism on his Attorney General Jeff Sessions.
"Two long running, Obama era, investigations of two very popular Republican Congressmen were brought to a well publicized charge, just ahead of the Mid-Terms, by the Jeff Sessions Justice Department," Trump tweeted Monday. He appeared to be referring to Rep. Duncan Hunter, R-Calif., and Rep. Chris Collins, R-N.Y., both recently indicted by federal juries in separate corruption cases. "Two easy wins now in doubt because there is not enough time. Good job Jeff," Trump said.
Hunter, along with his wife, were indicted by the Department of Justice last month for alleged illegal use of campaign funds to pay personal expenses — from luxury vacations and health care to family meals. Collins was indicted earlier this summer on insider trading charges; he subsequently ceased his bid for re-election and announced he would resign from Congress at the end of his term. Both Hunter and Collins were the first congressmen to endorse Trump for President back in February 2016. Both Hunter and Collins have denied the allegations against them.
It's not clear whether Trump believes the indictments themselves are misguided — in addition to the timing of the charges — or both. The White House did not immediately respond to request for comment on the tweets.
"The Democrats, none of whom voted for Jeff Sessions, must love him now," Trump continued on Twitter. "Same thing with Lyin’ James Comey. The Dems all hated him, wanted him out, thought he was disgusting – UNTIL I FIRED HIM! Immediately he became a wonderful man, a saint like figure in fact. Really sick!"

A spokeswoman for House Speaker Paul Ryan seems to side with Sessions – who pronounced last month that the DOJ should be free from political influence – and backed the recent indictments of two sitting GOP congressmen.
"DOJ should always remain apolitical, and the speaker has demonstrated he takes these charges seriously," Ryan spokeswoman AshLee Strong said in a statement to ABC News. "For more, you can ask him at his press conferences this week.”
Very shortly after the indictments against Collins and Hunter were each announced, Ryan moved to strip both of their committee assignments pending outcome of the cases.
A Justice Department spokeswoman declined to comment on the president's tweets.

For months, Trump has ratcheted up attacks on Sessions, accusing him of disloyalty for — in his view — failing to align the investigative priorities of the Justice Department against Trump's political enemies. The president has said he resents Sessions' decision to recuse himself from all matters related to the Russia investigation — and blames him for allowing the appointment of special counsel Robert Mueller.
Trump, who won the 2016 presidential election in the shadow of an investigation of Hillary Clinton's emails, has also accused Sessions of not doing enough to investigate alleged crimes by Democrats and Clinton during the campaign.
After Trump in a recent interview accused Sessions of not having "control" of the Justice Department, Sessions shot back in a rare, direct rebuke.
"I took control of the Department of Justice the day I was sworn in," Sessions said in a statement on Aug. 23. "While I am Attorney General, the actions of the Department of Justice will not be improperly influenced by political considerations."
The Justice Department did not immediately respond to request for comment.
Last week, Trump — who was said to be angered by Sessions' statement — gave the clearest indication yet that a shake-up is coming soon at DOJ.
In an interview with Bloomberg News, he would not say if Sessions' job is safe past the Nov. 6 midterm elections. Several top Republican lawmakers have publicly tried to convince the president to hold off on any dramatic moves at DOJ until after the Mueller investigation concludes — or at least until after the election.
The president has agreed not to remove the attorney general before the election, but they could not guarantee he wouldn't change his mind and act sooner, sources have told ABC News.
Copyright © 2018, ABC Radio. All rights reserved.