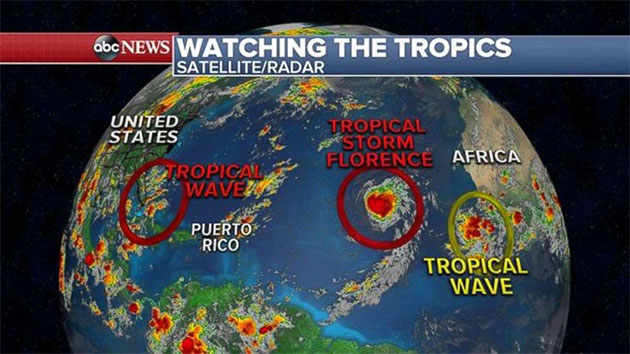 (NEW YORK) — A tropical storm warning is in effect for the Gulf Coast and a hurricane watch has been issued from Alabama to Louisiana as Tropical Storm Gordon looms.

The storm is moving through southern Florida and the Florida Keys Monday, bringing rain and thunderstorms.

The storm is expected to make landfall in the southern Louisiana area around New Orleans between 7 and 8 p.m. Tuesday.

The National Hurricane Center has issued a hurricane watch along the border of Alabama and Louisiana because sustained winds are forecast to reach 70 mph, just 4 miles short of hurricane strength.

A lot of the country will be seeing heavy rain and flooding this Labor Day.

Several storm systems are bringing flash flooding from the Gulf Coast to the Great Lakes this Labor Day.

A slow-moving storm system is causing heavy rain and flooding from Kansas to Illinois.

Another separate system is moving through the western Gulf Coast, bringing heavy rain and flooded roadways to the Houston and Galveston, Texas, areas.

More than a half foot of rain was reported along the coast near Galveston.