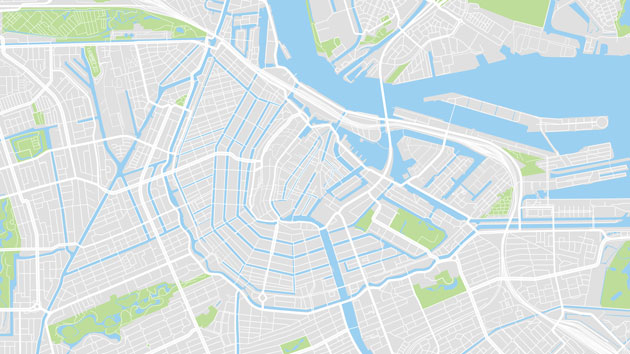 iStock/Thinkstock(AMSTERDAM) — An Afghan man suspected in the stabbing of two American tourists in Amsterdam told investigators he traveled there to carry out an attack as vengeance for offensive statements made in the Netherlands about the Prophet Muhammad, prosecutors said Monday.
A remand hearing for the 19-year-old suspect, identified only as Jawed S., was held in his hospital room on Monday as police probed the unprovoked attack in Amsterdam's bustling Central Station on Friday as a terrorist act, officials said.
No group has claimed involvement in the attack and prosecutors said there is no indication that the suspect worked with others.
The suspect allegedly stabbed the two victims, both 38-year-old men, with a large knife around noon Friday in Central Station, through which approximately 250,000 people travel daily. He was shot and wounded by police immediately afterward.
The victims, whose names have not been released, are recovering in a hospital from what police said were serious but not life-threatening injuries. The U.S. ambassador to the Netherlands, Pete Hoekstra, said they are American tourists.
Jawed S., an Afghan citizen, had been seeking asylum in Germany, which he applied for in 2015, German Federal Police officials told ABC News. He had a temporary German residence permit and was in the process of obtaining a permanent one, officials said.
He allegedly committed the stabbings as soon as he arrived at Central Station around noon Friday on an international train from Germany, prosecutors said.
He said, according to prosecutors, that he chose his victims at random and that he did not realize they were American tourists.
"From the statements that the defendant has made so far, it becomes clear that the man had a terrorist motive in committing his actions and that he came to the Netherlands for that," prosecutors said in a statement released Monday.
The suspect told investigators that he specifically chose the Netherlands for the attack because he believes that in the Netherlands "the Prophet Muhammad, the Koran, Islam and Allah are often offended," prosecutors said in the statement.
In an interview with the investigators, Jawed S. mentioned Geert Wilders, a Dutch anti-Islam politician. Wilders announced in June plans to hold a Prophet Muhammad cartoon competition, but on Thursday he canceled the event after angry protests broke out in Pakistan.
"To avoid the risk of victims of Islamic violence, I have decided not to let the cartoon contest go ahead," Wilders — a member of the Dutch Party of Freedom, the second-largest political party in the Netherlands — said in a statement.
Investigators tracing the suspect's movements in Germany have found no records that he was on the radar of police there before the attack, a German Federal Police official told ABC News on Monday.
Investigators interrogated the suspect over the weekend.
Prosecutors said Jawed S. will undergo a psychiatric examination.
Police raided the suspect's apartment in Germany on Saturday and seized several electronic devices that will be transferred to the Netherlands for further investigation, authorities said.
During Monday's detention hearing at the suspect's hospital bedside, an investigative judge ruled there is enough evidence to keep him in custody pending charges being filed against him, prosecutors said in a statement following the hearing.
The judge considered Jawed S. a potential flight risk and a danger to the community in ruling that authorities can keep him in custody for two weeks as the investigation proceeds. If charges are not filed within two weeks, a separate, three-judge panel would have the option of extending detention for up to 90 days, prosecutors said.
After the stabbing incident Friday, police quickly responded and shot the suspect in the lower body, officials said. Photos showed a man after he was shot lying on the floor of the train station as two police officers stood nearby with their guns pointed at him.
U.S. Secretary of State Michael Pompeo spoke by phone with Dutch Foreign Minister Stef Block about the attack, said State Department spokeswoman Heather Nauert.
"The Secretary expressed appreciation for the quick response of Dutch law enforcement to the attack and assistance given to the victims and their families," Nauert said in a statement Monday afternoon. "Dutch and U.S. law enforcement are cooperating in the investigation, and the Secretary and Foreign Minister reiterated their commitment to stand together in our common fight against terrorism in all forms."
Holland has been considered a target since attacks by Islamic extremists in France, Belgium, England and Germany, and because the country supports military operations against ISIS in the Middle East.
Nauert, who praised Dutch authorities for their "courageous efforts," said in the statement that the United States "stands with our Dutch allies and others in our common fight against terrorism in all forms."
Copyright © 2018, ABC Radio. All rights reserved.