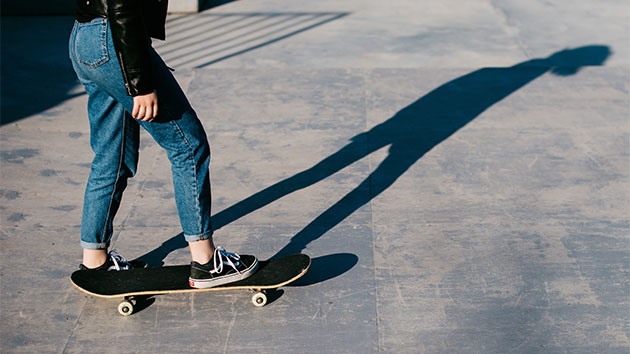 On Aug. 26, Lizzie Armanto of Oceanside, California, was one of the three skateboarders whose names were added to the list of roughly 15 people who have successfully landed the trick created by Hawk.

Armanto chatted with "Good Morning America" about accomplishing the near impossible feat.

"So I made it, and then everyone was screaming," Armanto told "GMA." "A bunch of my friends and Tony [Hawk] ran to me and Tony throws his phone because he was so excited."

Armanto, 25, said she was introduced to skateboarding at the age of 14 when her brother wanted to give it a go.

"My mom just took us both to the skate park and I tried it as well," she recalled. "From the start, we both were at the same level. We didn't know how to do it, but I was like, 'I'm not going to let my little brother be better than me.'"

Armanto soon began competing and entered the 2009 Pro-Tec Pool Party at Vans Skatepark in Orange, California, when she was 16.

"There were't many girls skating at that time and I was just a local girl and they were hooking me up with boards," she said. "By skating my first competition, I got a taste of the bigger skating community and I think that's what really drew me in and made me wanted to pursue [it]."

It was at Vans where Armanto met Hawk and eventually became the newest pro on his Birdhouse skate team. She is the only female member on the team.

"I can call any of those guys up if I needed something and they'd come through," Armanto said of her team, whom she thinks of as family.

Armanto took the gold at the 2013 X Games in Barcelona. She has her own character in Tony Hawk's Pro Skater video game and in 2016 she was the first woman to ever grace the cover of Transworld Skateboarding magazine.

In 2017, Armanto was the third woman to make the cover of Thrasher Magazine. That same year, Hawk and Birdhouse presented her with her own signature pro model skateboard.

"I've put my time in to get to where I am and I've had a really awesome support group and that starts with my parents teaching me by example," Armanto said of her success. "My mom is an engineer and she's in a male-dominated industry too and a lot of her attitude, I think, I have a hint of it."

Last week, skaters were invited to attempt the loop at a promotional event outside Hawk’s company warehouse.

The daring ride has a 14-foot drop and a Hot Wheels-style, 360-degree ramp. The track is 16 feet long. Hawk took it on his Boom Boom Huckjam tour in 2003 but brings it out every now and again when skaters ask to give it a try.

After a few attempts, Armanto nailed the landing.

Hawk tweeted a video of the moment, calling it "an inspiring display of fierce determination and skill."

As for her message to aspiring skaters, Armanto said to never second-guess yourself.

"Being a female is part of your identity so when you see another female doing it it's like, 'Yea…I can do this,'" she said.