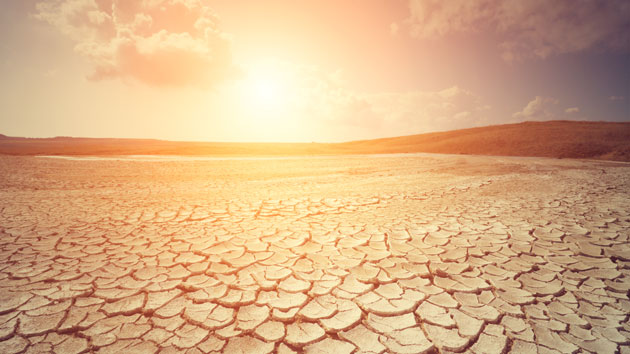 iStock/Thinkstock(NEW YORK) — Rising global temperatures are leading to a boom in the number of insects devouring crops worldwide, and could cause future food shortages, says a study published last week in the journal Science.
According to researchers, the global yield losses of wheat, maize and rice crops to pests, particularly in the temperate northern regions of the globe, are projected to increase by 10 to 25 percent per degree Celsius increase of global mean surface warming.
"The impact of insects because of climate change could be at least as great and perhaps greater than the impact of climate on crop itself directly," Josh Tewksbury, a research professor at the University of Colorado, Boulder, and one of the authors of the study, told ABC News. "The major finding is that we're underestimating the degree to which climate change is going to impact our ability to feed the world."
The study found that the U.S., the world largest maize producer, could see a roughly 36 percent increase in insect-induced maize losses by 2050 under current climate warming trajectories, a total reduction of almost 20 million tons annually.
Meanwhile, the world’s top rice producer, China, could expect future insect-induced losses of over 27 million tons annually by 2050.
Wheat produced in European countries will also see a huge crop loss to insects. France alone will lose roughly 2.5 million tons of total wheat production by 2050.
To study how rising temperatures and more insects could impact food crops, researchers looked at the impact that insects currently have on rice, maize and wheat. They then calculated the potential for crop damage through 2050 by adding robust climate projection data, crop yield statistics, insect metabolic rates, and demographic information.
As the temperature increases in temperate zones like Europe and the U.S., so does the appetite of pests.
“Insects get hungrier, eat more, their metabolism goes up and in the temperate zone we predict that those insects will reproduce faster. It will get bigger populations every summer,” said Tewksbury.
He added that using pesticides to combat the pests will have adverse side effects, are not sustainable solution.
Scott Merrill, a professor at the University of Vermont and one of the authors of the study, said that he hopes this research will help people begin to find solutions to pest increases. One might be using natural predators to combat insects, like parasitic wasps and lady bugs, who will also experience a population boom due to climate change.
“Those are natural enemies that can be used as biological control and they should be experiencing some of the same dynamics that we see with the pest,” said Merrill.
However, not everyone will be able to afford to deal with the pest boom of the future.
"Some of the rich countries will probably find ways that they can manage for these pests although there's going to be a lot more pressure," said Merrill. “I'm really worried about the countries and regions that don't have a lot of resources.”
Copyright © 2018, ABC Radio. All rights reserved.