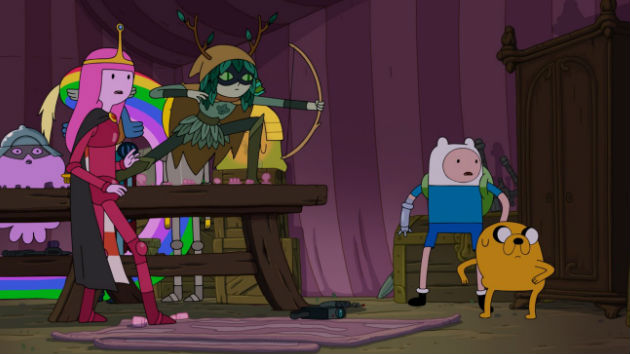 The show about Finn, an adventuresome pre-teen, and his stretchy-legged dog friend Jake first hit the air on April 5, 2010. It quickly became a hit with both kids — who dug the show's candy-colored kookiness and clever catchphrases — and adults, who could appreciate its intricate world-building, sparkling wordplay, and subversive humor.
"That's the beauty of the show, I think," John DiMaggio, who voiced Jake the Dog, told ABC Radio. "It had…something for everybody. And that's a great thing: to be able to sit down with the kids, with the college age kids, the adults, with the older folks. You know, we've been really fortunate."

DiMaggio, who for years voiced the obscene robot Bender on Futurama, and now can be heard on Matt Groening's new Netflix animated series Disenchantment, added, "[I]t's bittersweet, you know, something like this ending — that's what happens in show business. You get involved in a project that's really fantastic and…it always ends! It always ends, and you gotta be prepared for that."
The final episode surrounds the looming final battle between the armies of the heroic Princess Bubblegum and her evil Uncle Gumbald. It airs at 6 p.m. ET on Cartoon Network.

On Tuesday, September 4, Adventure Time: The Final Seasons will be released on DVD.