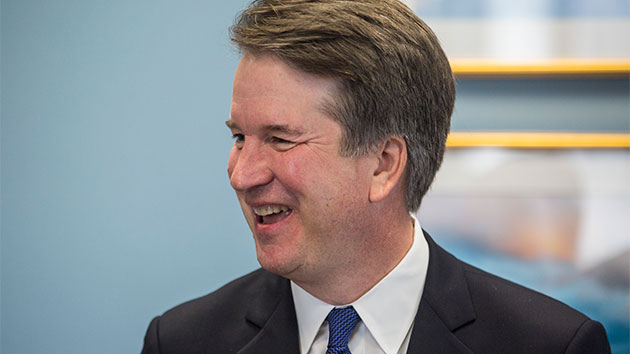 Zach Gibson/Getty Images(WASHINGTON) — Democrats are expressing alarm over the Trump White House decision to claim executive privilege and withhold some 100,000 pages of documents from Supreme Court nominee Judge Brett Kavanaugh’s time with the George W. Bush administration.
That decision, relayed in a letter late Friday, just days before confirmation hearings are set to begin Tuesday, is a move top Senate Democrat Chuck Schumer of New York called a “Friday night document massacre.”
On Sunday night, just hours before the hearings were set to begin, another 42,000 pages of Kavanaugh documents were released to the Senate, Schumer tweeted.
More than 400,000 other pages had been previously handed over to the Senate Judiciary Committee, but Democrats say the withheld documents would give details and color to Kavanaugh’s time as staff secretary and associate White House counsel in the Bush White House — when he was involved in some of its most controversial decisions and judicial nominations.
It's a time Democrats say is key in giving context to his time as a partisan Republican.
Before serving in the Bush White House, Kavanaugh had been a key deputy to Independent Counsel Ken Starr and advocated for tough questioning of President Bill Clinton about his sexual encounters with then-White House intern Monica Lewinsky.
Later, he said, after seeing the pressures inside the Bush White House, he wrote in a 2009 article for the Minnesota Law Review that any civil and criminal investigations of a president should be deferred until they're out of office because they’re “time-consuming and distracting.”
The just over 100,000 pages of material was withheld after the Trump White House “directed that we not provide these documents,” wrote William Burck, the lawyer handling the document release on behalf of the Bush administration.
The Department of Justice and the White House said it had identified the documents to be within “constitutional privilege,” Burck wrote in the letter, which was released by the Senate Judiciary Committee. Most of the documents “reflect deliberations and candid advice concerning the selection and nomination of judicial candidates, the confidentiality of which is critical to any president’s ability to carry out this core constitutional executive function,” Burck wrote.
The documents that didn’t concern judicial candidates, Burck wrote, contained “advice submitted directly” from Kavanaugh to Bush, conversations between White House staffers that disclosed conversations with the president and “substantive” discussions about executive orders or legislation.
Schumer called the “last moment” decision by President Trump “unprecedented in the history of [Supreme Court nominations]” and said it had “all the makings of a cover up.”
“Senators should not be willing to cast a 'yes' vote for a nomination of this magnitude when more than 90 percent of the nominee’s record is being denied to them,” Senator Diane Feinstein tweeted on Saturday.
Sen. Dick Durbin of Illinois, the second-ranking Democrat in the Senate and also a member of the Judiciary Committee, said on "FOX News Sunday" that they’d be lucky to see six percent of all the documents out there.
“If he’s so proud of his conservative credentials, show us the record, stand before us, trust the American people and they will trust you. I would say that to Judge Kavanaugh,” Durbin said.
Fox News anchor Chris Wallace noted that the committee has received almost half a million documents on Kavanaugh, more than provided for the past five Supreme Court nominees.
Another Democratic Judiciary Committee member, Sen. Amy Klobuchar of Minnesota, raised concerns over more than 140,000 pages of material that have been made available to senators but not to the public.
“I think that you could ask some very interesting questions about these documents that I'm unable to even say, because I'm not able to make them public,” Klobuchar said on NBC’s “Meet the Press” on Sunday.
Asked if the documents she’s seen would actually raise doubts about Kavanaugh’s ability to be fair, Klobuchar said it would “strongly bolster the arguments that [she] could make.”
Republicans, who hold just a 51-seat majority in the Senate, are quick to point to the public career of Kavanaugh and the hundreds of thousands of documents provided that show his stances on different issues.
“The Democrats have more than enough information to understand that this is a highly qualified jurist that should be the next Supreme Court justice,” said Republican Sen. Ron Johnson of Wisconsin on ABC’s This Week Sunday. “In an earlier time, 30 years ago, he would have passed unanimously.”
Sen. Lindsey Graham, a Republican from South Carolina, pointed to the 308 decisions Kavanaugh wrote in his time on the D.C. Circuit Court of Appeals as enough to form a “pretty good idea of what he thinks,” he said on Fox News Sunday.
“Senator Grassley has been very fair,” Graham said, emphasizing the record-high number of documents already provided. “We're going to have a hearing and there's no drama in this hearing,” he said.
Despite the Democratic grievances, Graham predicted Kavanaugh would be confirmed, calling him “the one person I think every Republican president would see is the most qualified of their generation.”
He predicted a smooth confirmation with 55 or more votes for Kavanaugh — meaning he assumes a “handful of Democrats” will join Republicans in voting for the president's nominee.
Because of the razor-thin margin in the Senate, the focus is on the 10 Democrats running for re-election in 2018 in states that Trump won just two years ago. Three of those Democrats, including Sen. Heidi Heitkamp of North Dakota, Sen. Joe Donnelly of Indiana and Sen. Joe Manchin of West Virginia, voted to confirm Supreme Court Justice Neil Gorsuch, Trump's previous nominee.
There are also two Republican senators on the radar: Lisa Murkowski of Alaska and Susan Collins of Maine, both of whom are pro-choice.
Last month, Kavanaugh told Collins he believed the 1973 Roe v. Wade decision was “settled law” — a comment she was pleased with, but that many Democrats and abortion rights organizations called vague and unimpressive.