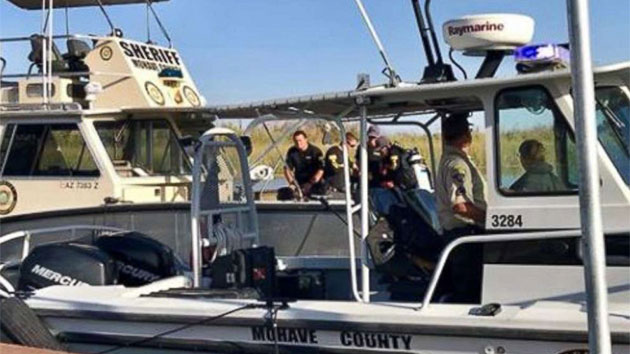 Officials said two recreational boats, one carrying 10 people and the other with six, collided head-on. Both vessels were going about 50 mph when the crash occurred, ejecting all 16 boaters into the water.

As search-and-rescue crews continued to look for three other boaters who vanished in a popular section of the river near the California-Arizona border, authorities identified the body recovered Monday as Christi Lewis, 51, of California.

Lewis' body was pulled from the river about 7:30 a.m. by divers, according to officials at Mohave County Sheriff's Office Division of Boating Safety.

"The Mohave County Sheriff's Office will continue to patrol the Colorado River until all the unaccounted for passengers are located," the statement from the agency reads.

Two other women and a man, whose names have not been released, remain missing in the Labor Day weekend tragedy.

The crash happened around 8 p.m. Saturday near Moabi Regional Park on a stretch of the Colorado River north of Lake Havasu.

None of the boaters were wearing life-jackets at the time of the crash, officials said.

Following the crash, other boaters in the area rushed to pull survivors from the water, officials said.