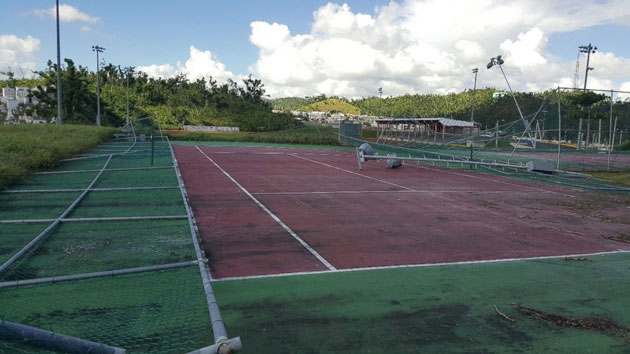 Miguel Lozada(SAN JUAN, Puerto Rico) — Miguel Lozada remembers the moment tennis exploded on the island of Puerto Rico.
"Years ago we had Roberto Clemente, but when Monica won the gold medal – I had never seen a community completely paralyzed to see that match," he said.
San Juan native Monica Puig had just won the gold medal at the 2016 Rio Olympics, the first the island has won under the Puerto Rican flag.
"Very quickly after the win, my cell phone started to ring. From 50 students, it went up to 100. People calling to get classes so they can get their kids to play tennis – they all wanted to be like Monica Puig,” Lozada said.
Puig calls that moment overwhelming.
"I never saw myself as like anybody’s idol and there are these little kids running up to me saying I want to be just like you when I grow up and I was like really?" Puig told ABC News after a match at the US Open.
Hurricane Maria made landfall on Sept. 20, 2017, as a category 4 hurricane. Maria left in its wake nearly $140 billion in damage, claiming thousands of lives and leaving the whole island in need of healing.
In the aftermath of the storm, Puig started an online fundraising campaign to collect donations for people on the island.
"After the Hurricane, I went with Maria [Sharapova] with the money that we set up with the YouCaring account we were able to buy insulin for the hospitals, portable stoves, gasoline for the stoves, lanterns for light," Puig said
Puig has raised nearly $200,000.
"Their faces of happiness: How they came in, took a ball and they started playing before I started to give the lesson," Lozada said.
Lozada still remembers the day his tennis facility reopened months after Hurricane Maria – dozens of his students returned to play.
The effect of Maria was felt in every corner of the island including at Lozada’s El Valenciano Tennis Academy in the eastern central town of Juncos. The facility that had 2 courts and lights to allow for play at night was damaged.
"Even though we didn’t have power, we still found a way to practice… the children would say 'I need to practice. I want to play,'" Lozada said.
Omar Davila’s son Jayden trains at Lozada’s facility. The weeks after the storm, the 7-year old would ask his father when he could start to play again.
Davilia said that the academy’s nearly 100 students wanted to see each other after the storm in an effort to return to some normalcy.
"Sports united them," Davila said, adding, "tennis gave them a desire to get ahead in life, to be better, to help their neighbors. It was something very beautiful and a lot more than before the hurricane."
The United States Tennis Association, organizers of the US Open now in its 50th year, have exclusively told ABC News that they have pledged $350,000 to refurbish facilities and restart programming throughout the island. The USTA Foundation says that all contributions will go directly towards Puerto Rico.
The next phase of the recovery for Puig is helping to grow the sport and to ensure people’s homes will remain safe.
"We are looking at what we can do with all the money that is continuing to come in. And I think we are going to go more into rebuilding roofs of houses," she said.
Lozada and the children of his camp embody a phrase heard so often on the island after the storm Puerto Rico Se Levanta – Puerto Rico rises.
"Maria stopped us but it also taught us that we need to reinvent ourselves. We have to go forward," Lozada said.