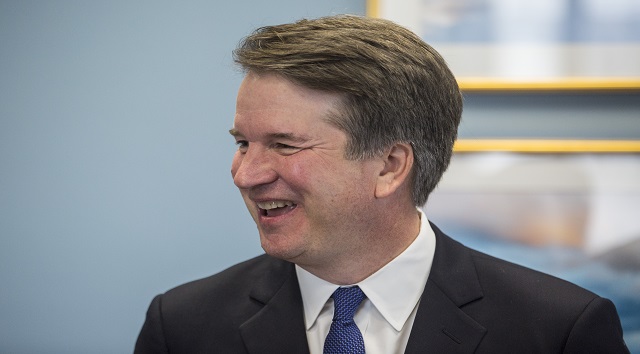 Zach Gibson/Getty Images(WASHINGTON) — Despite efforts by most Senate Democrats to protest his nomination and delay his confirmation hearings, Judge Brett Kavanaugh is set to appear before the Senate Judiciary Committee Tuesday to make the case he belongs on the Supreme Court.
Following his hearings, the former Bush administration staffer and current D.C. Circuit Court of Appeals judge should have a relatively smooth path to confirmation, which is likely to take place well before the November midterm elections.
The Senate’s minority members, save a few centrists, have argued that Kavanaugh’s record as a top staffer in the George W. Bush White House has not been adequately vetted and that his hearings should be postponed altogether because of the legal issues surrounding President Donald Trump.
They also have specifically raised issues concerning Kavanaugh's views on executive power, suggesting that Trump chose him because he has stated he's opposed to sitting presidents being investigated.
But Republicans have dismissed those concerns as politically-driven. They also have the majority status, and, likely, the votes, to confirm Kavanaugh on their terms and schedule.
“I look forward, along with the rest of the Senate, in performing our constitutional duties beginning next week, providing advice and consent on this important nomination,” Senate Majority Leader Mitch McConnell said Tuesday.
Kavanaugh is virtually assured of the Senate support he needs to be confirmed. He is expected to have the votes of all 50 sitting Republicans, and Arizona Gov. Doug Ducey is required by law to appoint a Republican to fill the seat of the late Sen. John McCain, so it's possible that McCain's replacement (likely someone who would toe the party line) will be seated by the time Kavanaugh’s nomination comes before the full Senate, which would bring him the needed 51 votes.
There are a handful of Senate Democrats who also might vote for Kavanaugh, particularly red-state Democrats up for re-election this November, including Sen. Joe Manchin of West Virginia, who has said he wouldn't announce how he'd vote “until I complete a thorough and fair examination of his candidacy.”
In the unlikely event no Democrats join Republicans – and a McCain replacement has not yet been sworn in – Vice President Mike Pence could cast the tie-breaking vote in Kavanaugh's favor.
The virtual certainty of Kavanaugh’s confirmation, however, has not slowed Democrats’ resolve to voice their objections to Kavanaugh’s record and the confirmation process, which they say has been inadequate in scope and timing.
Democrats have argued that they deserve to review Kavanaugh’s records as White House staff secretary during the Bush administration, a role in which he oversaw all documents that made it to the president’s desk, including on controversial policy matters. In a letter to
Senate Judiciary Committee Charles Grassley sent Tuesday, all 10 committee Democrats accused the majority of “discourag[ing] the National Archives from responding to our separate request for his records as Staff Secretary from 2003 to 2006.”
"For Republicans to suggest that records related to his position as White House staff secretary aren’t relevant to the committee’s review of his nomination is distressing," Sen. Dianne Feinstein has said previously, noting that Kavanaugh himself has referred to his tenure as staff secretary in describing the full measure of his record.
Grassley, R-Iowa, has argued that Kavanaugh’s record as staff secretary is irrelevant to his judicial philosophy and that making all related documents available would run the risk of disclosing classified information.
Republicans have also pointed out that more documents have been made available pertaining to Kavanaugh’s career than have been provided concerning any other Supreme Court nominee. On Tuesday, the Judiciary Committee released an additional 85,000 pages of material related to Kavanaugh’s service as a White House lawyer during the George W. Bush administration.
Democrats, including Sen. Richard Blumenthal, D-Conn, have also highlighted their concerns related to Kavanaugh’s views on executive power, particularly those he laid out in a 2009 article in which he argued that sitting presidents should not be subject to criminal investigations or a prosecutor’s questions while in office, and suggested Congress pass a law to that effect. His views were shaped by his experience serving on independent counsel Kenneth Starr’s team investigating then-president Bill Clinton.
The minority members of the Judiciary Committee will likely hammer Kavanaugh with questions on that viewpoint.
Most recently, Senate Democrats began calling for a pause in the nomination proceedings in light of former Trump confidante Michael Cohen’s allegations that Trump directed him to make payments to women with whom Trump had affairs, in order to keep them from speaking out. Several Senate Democrats also canceled their meetings with Kavanaugh following the Cohen revelations.
“He's been nominated by a president who's been implicated in a criminal conspiracy,” said Blumenthal, shortly after the Cohen allegations came to light. “There is no way that his nomination will be untainted. The court itself will be stained.”
Cohen did not mention Trump by name in a statement made when he made his plea agreement and Trump was not named as an "unindicted co-conspirator" as some Democrats said.
But Grassley dismissed the canceled meetings – and the calls for a delay that followed – as political posturing.
“This is just another obvious and opportunistic attempt to push the confirmation past the midterm elections,” Grassley said Tuesday.
Amid the partisan sniping, Kavanaugh himself appears to be operating full steam ahead as well. According to a senior White House official, the judge has been drilled in at least two full-day mock hearings and is feeling confident about his upcoming performance.
Copyright © 2018, ABC Radio. All rights reserved.