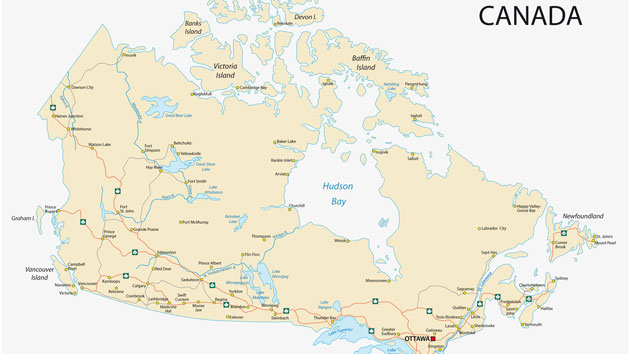 iStock/Thinkstock(WASHINGTON) — As efforts stalled Friday to persuade Canada to sign onto a rewrite of the North American Free Trade Agreement, President Donald Trump blasted “dishonest reporting” for complicating a potential deal after off-the-record comments he made during an interview with Bloomberg leaked into the Canadian press.
According to a published account of the president’s leaked remarks, Trump told Bloomberg News Thursday that he is not entertaining any compromises at all in discussions with Canada — but he cannot admit his posture publicly because “it’s going to be so insulting they’re not going to be able to make a deal.”
At an event on retirement security in Charlotte, North Carolina on Friday, the president confirmed the off-record remarks that leaked out of the Oval Office.
"I gave an interview yesterday to Bloomberg Business, and I said 'off the record,' and I made a statement about Canada, which is fine because I love Canada but they have taken advantage of our country for many years," Trump explained.
"I said off the record, off the record, I said something strong, that is my belief. They violated it and they said they were violating it," Trump continued. "When you say, ‘off the record’ — that is a very — it is not a legal term but it is a term of honor."
A Bloomberg spokesperson denied that the news organization was responsible for the leak.
"When we agree that something is off the record, we respect that," a Bloomberg spokesman stated.
According to the Toronto Star: “In a remark he did not want published, U.S. President Donald Trump said that a possible NAFTA deal with Canada would be ‘totally on our terms,’ according to a source.”
"Off the record, Canada’s working their ass off, and every time we have a problem with a point, I just put up a picture of a Chevrolet Impala,” Trump reportedly told Bloomberg, according to the Star.
The administration had tried to make Friday an informal deadline to pressure Canada to agree to the deal in order to then send an agreement to Peña Nieto before he leaves office on December 1. Changes to NAFTA would require congressional approval before taking effect.
“We continue to work very hard. We're making progress. We're not there yet,” Chrystia Freeland, the Minister of Foreign Affairs of Canada told reporters Friday afternoon. “This is a very complex agreement and we are going to continue working at it. As we said from the outset, our objective in these talks is to update and modernize NAFTA in a way that is good for Canadians, good for Americans and good for Mexicans. We know that a win-win, win, agreement is within reach and that's what we're working towards.”
Even though negotiations failed to produce an agreement Friday, U.S. Trade Representative Robert Lighthizer called the prospective deal “the most advanced and high-standard trade agreement in the world” and announced that Trump formally notified Congress of his intent to sign a trade agreement with Mexico – and Canada, if it is willing – 90 days from now.
Lighthizer added that trade negotiations are expected to continue on Wednesday next week with both Mexico and Canada.
“The talks were constructive, and we made progress,” Lighthizer said. “Our officials are continuing to work toward agreement.”
In Charlotte, Trump added that if the U.S. does not reach a deal with Canada, "that’s just fine,” offering a variation of one of the lines leaked to the Toronto Star paper: "I say affectionately, we’ll just have to tariff those cars coming in, that’s a lot of money coming into the coffers of the United States.
On Monday, Trump and Mexican President Enrique Pena Nieto announced an agreement with Mexico to revise key parts of NAFTA – and both leaders expressed hope that Canada might negotiate to revise bilateral issues with both countries in order to conclude a trilateral negotiation by the end of the week.
"We'll see if Canada can be part of the deal," Trump said on Monday, though he expressed an openness to a separate bilateral deal with Canada and pledged to terminate the existing NAFTA agreement after deals are reached with both countries.
During Monday’s announcement with Mexico, Trump threatened to put tariffs on all cars made by Canada — an apparent effort to build pressure on America's northern neighbor only reinforced by his off-record comments to Bloomberg.
The new agreement between the U.S. and Mexico focuses primarily on automobile manufacturing, including a provision to require that 40 to 45 percent of all automobile components be made by workers earning $16 or more per hour, which the U.S. hopes will help American manufacturers compete against low-wage auto workers abroad. The deal also proposes requiring a significant portion of automobile parts — 75 percent — be made in the U.S. and Mexico.
Copyright © 2018, ABC Radio. All rights reserved.