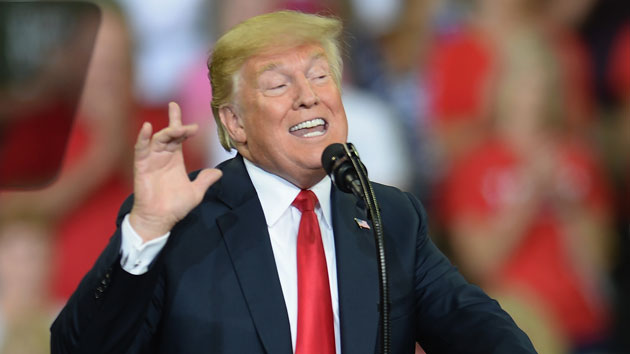 Michael B. Thomas/Getty Images
Posted on September 1, 2018 by ABC News

Michael B. Thomas/Getty Images(CHARLOTTE, N.C.) — President Donald Trump signed an executive order Friday in Charlotte, North Carolina, that would make it easier for small businesses to band together in associations to provide affordable retirement savings plans.
"Today's historic action will provide new retirement security to countless American workers and their families. We believe all Americans should be able to retire with the confidence, dignity and economic security that you want," Trump said.
Trump said he was “thrilled” to be in Charlotte for the afternoon drumming up support for his administration’s policies and later, rallying for the GOP. For his afternoon executive order signing, the president was joined by a congressional ally, Rep. Mark Meadows, R-North Carolina, and two cabinet members, Labor Secretary Alexander Acosta, and Small Business Administrator Linda McMahon.
"I'm thrilled to be back in Charlotte and the fact is that it's a very special place, so special, we chose it for the 2020 Republican national convention," Trump said. "Right? And had a lot of places wanted it. A lot of places want those things where some people come in and spend their money."
The official White House event, paid for with taxpayer dollars, Trump noted, is "like a political event and you don't even have to pay for it" because of all the reporters in the room.
In a room full of local business leaders and Trump supporters, the president knocked Democrats, criticized the media and the recent leak from his interview with Bloomberg, and even plugged his North Carolina property.
"I actually have investments in Charlotte,” Trump said. “The fake news will say that is a conflict of interest. You know where my club is, Trump National — very big success on Lake Norman," Trump said.
The president wished the crowd a happy Labor Day weekend, but said he is going to be doing some homework over the holiday and study federal worker pay raises.
"A lot of people were against it. I will take a good hard look over the weekend," Trump said.
Yesterday Trump sent a letter to Congress saying he plans to cancel federal worker pay raises that were scheduled to take effect in January. His decision — which would affect the paychecks of almost 2 million civilian workers across the country — was met by public backlash.
Later in the afternoon, Trump turned his attention to campaigning for Rep. Ted Budd and GOP candidate Mark Harris at Carmel Country Club in Charlotte. The fundraiser, set in a glitzy ballroom with a large American flag backdrop, benefits the National Republican Congressional Committee.
Standing in front of an American flag, the president greeted with boos when he addressed the hot topic issue of redistricting in North Carolina.
On Monday, federal judges ruled the Republican districting map for North Carolina is unconstitutional, and made the suggestion that district lines be redrawn ahead of the November 6 election.
“It’s very unfair to have an election in less than 60 days and they change the district on you? And you’ve already won primaries? How does that work? “ Trump said. “I don’t know. There has to be something going on.”
The White House said that ahead of the general election, the president will be out on the road campaigning and fundraising – potentially making multiple appearances a day.
Trump came prepared for the fundraiser with a few papers that he referenced when going through a list of what he says Democrats would do if they take control of Congress in November.
“The Democrats, they’re going to raise your taxes, they’re going to increase job-killing regulations,” Trump said, reading from a paper. “They’re going to shut down your energy, the crime is going to be rampant — they’re going to raid your Medicare to pay for socialism. If you look at Venezuela, that’s a good example of current day socialism.”
The president refrained from attacking Sen. John McCain, who died a week ago, during Trump’s Evansville, Indiana rally on Thursday night. But during his stump speech in Charlotte, he almost brought up his old anecdote about McCain’s thumbs down no vote against Obamacare. McCain’s body lay in state at the U.S. Capitol on Friday while the president was out of town.
"We really had Obamacare defeated but unfortunately — you could say anyone that didn’t vote was really the deciding vote,” the president paused. “We didn’t get any of the Democratic votes. “
Copyright © 2018, ABC Radio. All rights reserved.