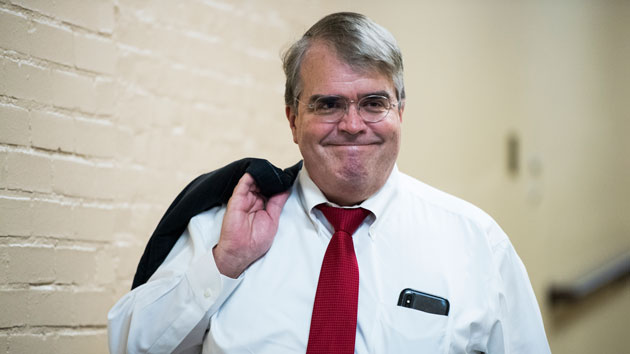 Bill Clark/CQ Roll Call(HOUSTON) — Texas Democrats are demanding an investigation into Republican Rep. John Culberson for what they say is his use of $50,000 in campaign funds to buy collectibles, books and Civil War memorabilia while claiming some of it was for research.
Culberson's campaign calls it nothing more than an "obvious partisan attack."
Daniel Cohen, a resident of Houston's 7th Congressional District, where Culberson is running for re-election, said he has filed complaints about the spending with the Federal Election Commission and Office of Congressional Ethics. He says he did so at the urging of the Texas Democratic Party.
In a draft copy of the complaint provided to ABC News, Cohen urges the FEC to "immediately launch an investigation to determine whether approximately $17,000 in payments for Civil War memorabilia and almost $33,000 in payments disclosed for “research purposes” violated the prohibition on using campaign funds for personal use."
"My priority is accountability. As a constituent in the district, I wanted to make sure the questions surrounding expenditures on memorabilia and other unusual items were proper and above board legally and ethically," Cohen, who is a Democrat, told ABC News.
From 2010 to 2016, Culberson has reported selling between $575,000 and $1.3 million worth of collectibles, according to the congressman's personal finance disclosures for that time period.
Since 2009, the congressman has reported spending more than $30,000 in campaign funds on books and other research materials.
Democrats are also questioning Culberson's $300 purchase with campaign funds at The Black Hills Institute, which prides itself on helping supply collectors with "the finest in professionally prepared fossils and cast replicas," according to the geological company's website.
Culberson's campaign team said the purchase was for books and maps to assist him in understanding paleoclimatology as the chairman of the House Appropriations subcommittee that oversees NOAA, the National Oceanic and Atmospheric Administration.
They say the money spent on these materials and others are simply just research required to aide Culberson in understanding different issues he oversees in Congress.
Culberson's aides also say the congressman has a hobby of collecting Texas military and Civil War memorabilia but was not required to list the collectibles as assets on his personal disclosure by the House Committee on Ethics because they are a personal hobby. His team claims any artifacts or memorabilia given as gifts from the congressman to donors or guests is an expense allowed by the FEC.
The national Democratic Congressional Campaign Committee isn't satisfied. “Culberson needs to answer for exactly why his campaign spent nearly $50,000 on Civil War memorabilia, coins, fossils, and more,” DCCC spokesperson, Cole Leiter said.
“His constituents deserve answers—and we all deserve better than what we are seeing in Washington,” Democratic candidate Lizzie Fletcher stated, who is challenging Culberson in the November election.
The Culberson campaign says the draft complaint documents are "ripped directly from the DCCC, are purely speculative, without merit,” Catherine Kelly, a spokesperson for the Culberson campaign, said.
The controversy comes in the wake of federal prosecutors alleging California Republican Duncan Hunter and his wife Margaret illegally spent more than a quarter of a million dollars of campaign money for his own personal use.
Hunter dismissed the indictment in a statement, calling the investigation politically motivated. "We are seeing this with President Trump; we are seeing this with my case. This is evidenced by the fact that after two years of investigating, the Department of Justice decided to take this action right before my election," he said.
Copyright © 2018, ABC Radio. All rights reserved.