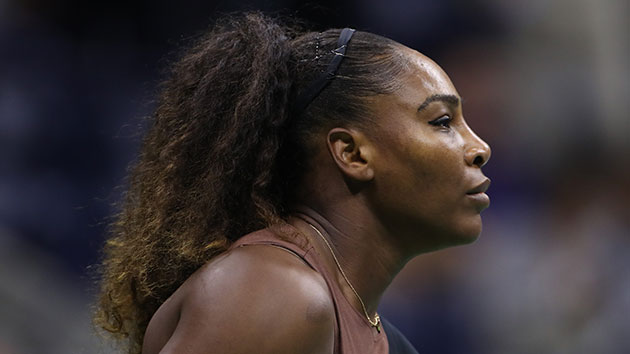 Tim Clayton/Corbis/Getty Images(NEW YORK) — Serena Williams praised former NFL players Colin Kaepernick and Eric Reid for "doing so much more for the greater good."
Williams made her comments at a press conference after a U.S. Open match at which she beat older sister Venus. Kaepernick and Reid, both former San Francisco 49ers, drew a standing ovation from the audience when they were shown on the big screen sitting in the stands.
“I think every athlete, every human and definitely every African-American should be completely grateful and honored how Colin and Eric are doing so much more for the greater good, so to say,” Williams said at the press conference. “They really use their platform in ways that is really unfathomable. I feel like they obviously have great respect from a lot of their peers, especially other athletes, people that really are looking for social change.”
Kaepernick began a wave of protests by NFL players two seasons ago, kneeling during the national anthem in what he said was a demonstration against racial injustice. Reid was one of the first players to join him in taking a knee for the silent protest, according to ESPN.
Despite leading the San Francisco 49ers to the Super Bowl in 2013, Kaepernick has not been signed to a team since he became a free agent in 2017. He filed a grievance contending that NFL owners conspired to keep him out of the league because of his protests.
On Thursday, an arbitrator denied the league's request to throw out the claim, sending it to trial, ESPN reported. Reid has a similar grievance pending.
Copyright © 2018, ABC Radio. All rights reserved.