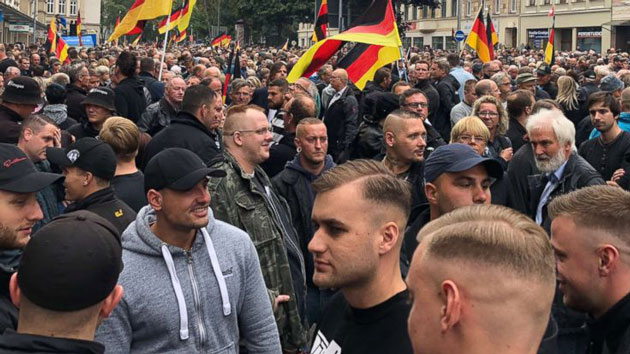 Sarah Hucal/ABC News(CHEMNITZ, Germany) — In the eastern German city of Chemnitz, the site of continued far-right protests and clashing counter-demonstrations, there has hardly been moment's rest.
Although the gatherings on Saturday were largely peaceful, the atmosphere was tense: a representation of two Germanys — one embracing of multiculturalism and the other still incensed by migration policy under Chancellor Angela Merkel, especially her 2015 decision to welcome 1 million refugees.
In anticipation of the day’s events, under an overcast sky, the streets were closed. A large banner had just been hung on the city’s landmark, a large statue of the head of Karl Marx, a nod to the city’s East German past.
“Chemnitz is neither grey nor brown,” the banner read, a reference to the color of the Nazi party and a message of tolerance in a city now linked with anti-immigrant sentiment.
Earlier in the week, the death of a 35-year-old German-Cuban, Daniel H., allegedly at the hands of Iraqi and Syrian-born men who are now in custody, was used as a rallying cry for far-right extremists.
Rumors swirled online around his death, and incited anger from many right-wing supporters. Authorities, however, were quick to debunk the myths.
“The mobilization was based on anti-foreigner comment, false information and conspiracy theories,” governor of Saxony, Michael Kretschmer, told reporters earlier in the week.
The region of Saxony, where Chemnitz is located, is a stronghold for the anti-Islam far-right party, the Alternative for Deutschland, and has long struggled with neo-Nazi aggression.
On Sunday, right-wing extremists and hooligans took the streets, harassing those who looked foreign and shouting xenophobic slurs. On Monday, violence reached a pinnacle as 6,000 right-wing protestors mobilized in the streets, facing off again 1,500 counter-demonstrators and overpowering ill-staffed police forces.
Authorities have since opened at least 10 cases after extremists who were seen making Hitler salutes.
The salutes — as well as swastikas and other insignias — are illegal in a country that has tried shake its Nazi past. But the 2015 immigration policy has brought newly emboldened Nazi sympathizers out of the shadows.
In preparation for Saturday’s fresh round of demonstrations, which attracted 9,500 people, according to initial estimates by the police, additional officers were brought in from several other regions.
Police forces had come under criticism for not responding with enough officers earlier in the week, even prompting some suspicions of collusion with right-wing protesters.
By late afternoon, several thousand people of various ages had gathered in front of the Karl Marx statue for the protest of right-wing citizen’s movement Pro-Chemnitz.
Some held German flags and chanted, “We are the people” and “Merkel has to go.”
A moderator urged crowds to avoid violence. Yet the group, which had also held a protest on Thursday drawing 900 people, had previously called residents to mobilize during the violent scenes on Sunday and Monday.
An hour later, a second right-wing demonstration began, organized by far-right political party Alternative for Deutschland (AfD), the main opposition party in the German parliament alongside anti-Islam, xenophobic citizen’s organization PEGIDA.
Soon they were joined by the members of the Pro-Chemnitz march and the crowd swelled.
Across town, a peaceful counter-demonstration titled “Heart instead of right-wing heat” drew a large crowd of several thousand.
Shortly before nightfall, several altercations between “black block” and right-wing extremists broke out, but were swiftly quelled by riot police. Later in the evening, small scuffles continued to break out between right-wing protestors and police.
The violence on Sunday and Monday further challenged the notion of modern-day Germany as a country welcoming of foreigners.
Merkel’s spokesman, Steffen Seibert, condemned the week’s violence.
“What was seen yesterday in parts of Chemnitz and what was recorded on video has no place in our country,” he said.
“People ganging up, chasing people who look different from them or who come from elsewhere … is something we won’t tolerate,” he continued.
On Monday, Saxony police reported receiving complaints from a 15-year-old German girl with a 17-year-old Afghan teenage boy who said they were attacked, an 18-year-old Syrian who claimed to have been beaten and a Bulgarian man claimed to have been threatened.
Nowhere else in Germany is the AfD as popular as it is in Saxony. A quarter of the region's voters chose the party in last September’s federal elections.
Copyright © 2018, ABC Radio. All rights reserved.

COVID-19 live updates: Unvaccinated Americans continue to drive infection, death rates
Two plead guilty to throwing Molotov cocktail at NYPD car during May 2020 protests
‘The ﻿Wendy Williams Show’ ﻿to continue with guest hosts into November
The need for water in the West will continue unless emissions are curbed.
Nancy Pelosi reiterates infrastructure vote plans as some Democrats continue to push back
Drugging allegations at Northwestern frat houses spark protests