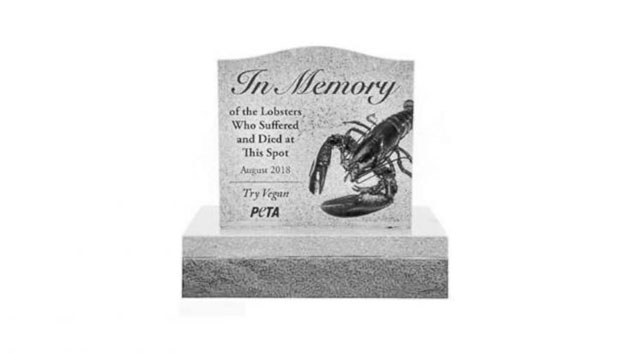 PETA(BRUNSWICK, Maine) — After a truck full of lobsters rolled over onto the side of the road in Maine, killing all the lobsters inside, People for the Ethical Treatment of Animals (PETA is now asking for the state's permission to put up a tombstone in memory of the fallen sea creatures.
The Brunswick Police Department confirmed that the crash took place on Wednesday, Aug. 22 along route 1. While they told ABC News that they did not count the lobster inside, it's estimated that there were about 4,500, according to the Portland Press Herald.
PETA, an American animal rights organization based in Virginia, is seeking state permission to put up a 5-foot-tall granite tombstone at the site of the crash. The organization sent a letter to the state's Department of Transportation on Wednesday.
“I'm writing to ask for your approval to place a 5-foot-tall tombstone memorial along Route 1 in Brunswick, just after the exit for Cook's Corner, as a tribute to the lobsters who suffered and died when the truck transporting them rolled over last week,” said PETA’s director Danielle Katz.
Amber Canavan, a spokesperson for PETA said that the organization is trying to convince the Department of Transportation to give it permission.
“[The tombstone] wouldn't be allowed on that section of the road. So we wrote a letter right back asking where nearby we might be allowed to place it,” Canavan said. “And we have not heard back from them yet.”
The tombstone would also be for the lobsters that were injured in the crash and are no longer fit for human consumption.
“The memorial will serve as a tribute to the countless lobster who suffered and died after they spilled onto the roadway,” Canavan said. “And also for the survivors as well, who are all very likely killed because they are deemed unfit for human consumption.”
PETA has also appealed to people to go vegan.
Copyright © 2018, ABC Radio. All rights reserved.