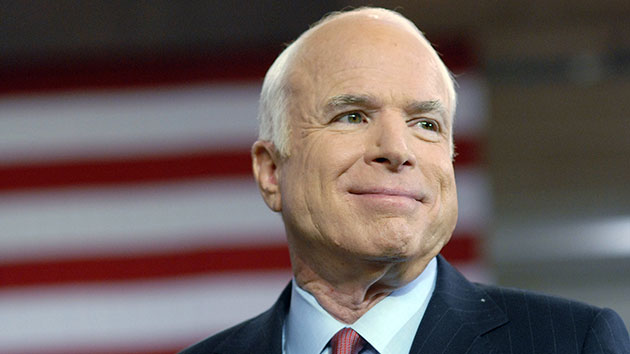 William Thomas Cain/Getty Images(WASHINGTON) — Former presidents Barack Obama and George W. Bush, as well as John McCain's daughter Meghan, will be among the speakers honoring the late senator at a memorial service Saturday at the National Cathedral in Washington.
McCain's remains were moved to the National Cathedral for the service on Saturday morning after he lay in state at the Capitol Rotunda. The procession carrying his casket made a stop at the Vietnam War Memorial, where wife Cindy McCain laid a wreath honoring servicemen and women who died during the war. Defense Secretary James Mattis and White House Chief of Staff John Kelly, a retired Marine Corps general, accompanied the McCain family to the war memorial.
The national memorial service for McCain at the cathedral is set to begin around 10 a.m. In addition to a tribute from the late Arizona senator and war hero's daughter, Meghan, several other family members are expected to give readings during the service.
Obama, Bush and other dignitaries are expected to speak, including Sens. Lindsey Graham and Kelly Ayotte, former Sen. Joe Lieberman and former Secretary of State Henry Kissinger.
Funeral services for former presidents have been held at the National Cathedral since 1901, according to its website. Most recently, a service for former President Gerald Ford was held there in 2007. The cathedral has also hosted funeral and memorial services for dignitaries such as astronaut Neil Armstrong and former South African President Nelson Mandela.
Copyright © 2018, ABC Radio. All rights reserved.