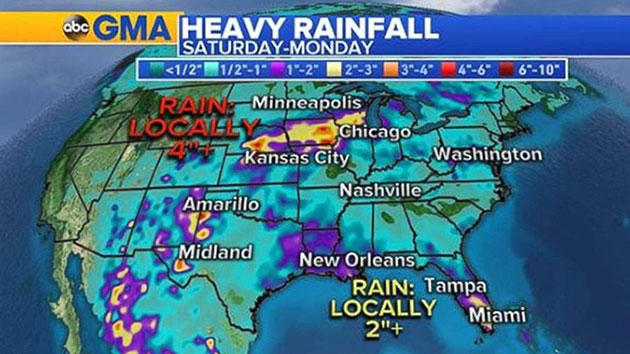 ABC News(NEW YORK) — Almost the entire country will be seeing rain at some point this holiday weekend with the exception being the West Coast and the northern Rockies.
Monsoonal moisture will be responsible for producing showers and storms over the Southwest and the central and southern Rockies throughout the weekend.
Tropical moisture will feed the development of showers and storms over parts of the Northern Plains, Lower Great Lakes, the mid-Atlantic, the Ohio and Tennessee valleys, and the Gulf Coast on Saturday and Sunday.
Watching the tropics
A tropical wave is producing disorganized showers and thunderstorms across Hispaniola and the Turks and Caicos Islands in the Caribbean on Saturday. The system is forecast to bring moisture to the Bahamas, Florida and Gulf Coast through the middle of next week.
The chance for this tropical disturbance to develop into anything more severe over the next several days is low due to wind shear in the surrounding environment.
Tropical moisture will increase rainfall totals for Florida this weekend. That means it will not be an ideal holiday getaway, as some spots south of West Palm Beach could see localized rainfall totals of 3 inches or more.
Tropical storm Florence developed early Saturday, with maximum sustained winds of 40 mph as it tracks west-northwest away from the Cabo Verde islands at 14 mph.
The system could produce 1 to 2 inches of rain Saturday across the Cabo Verde islands before it moves father into the Atlantic Ocean.
It will strengthen very slowly over the next 48 to 72 hours as it tracks westward with time, but this will likely remain a “fish storm” with no impact to land.
Copyright © 2018, ABC Radio. All rights reserved.